Katherine Lyons Talbot passed away in the home she loved on December 18, following a valiant 20-month battle against cancer.  Katie was born May 7, 1975 in Carlisle, Pennsylvania.  She was raised in Wyndmoor, Pennsylvania by her wonderful parents Bruce and Lori Eckert.  Katie loved growing up in the neighborhood, where she participated in countless backyard plays, pick up softball games, and bike rides to the Philadelphia Cricket Club for swimming and tennis.

Katie moved back to Philadelphia in 2004 and, shortly thereafter, met and fell in love with John Talbot, whom she married in 2006.  It was, as she would say not infrequently, the best decision she ever made.  Katie would go on to become a devoted mother to their three children — Jimmy, Matty, and Grace.  Katie was a Pinterest mom, but she wasn’t annoying about it.  From DIY valentines to Star Wars cake pops, she made it look easy and delivered it all with her trademark style.  On top of that, Katie also worked for Ann Kelly Interiors and found time to design her own stationary line.

Though her list of accomplishments is formidable, Katie’s greatest quality was that she was a loyal friend who was fun to be around.  She loved laughing, dancing, and girls’ nights out, and was always up for a Starbucks run.  She could also play a wicked air saxophone to Gerry Rafferty’s “Baker Street,” though she liked to keep that on the down low.

Beneath Katie’s easygoing, gentle exterior beat the heart of a fighter.  She endured 32 grueling rounds of chemotherapy with grace and, in the midst of her treatment, bought, moved into, and 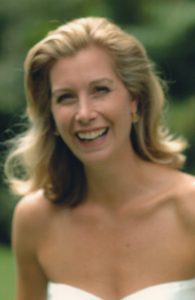 decorated a new house in her beloved “hood” of Wyndmoor.  Despite her rapidly declining health, she insisted on traveling to Savannah, Georgia to celebrate her parents’ 50th wedding anniversary this past Thanksgiving.  Through it all, she never gave up hope.

In addition to John and her children, Katie is survived by her parents, Bruce and Lori Eckert; her siblings Elizabeth Proctor, Annie Bennett, and Ben Eckert and their spouses; her in-laws Jim and Nina Talbot; her sister-in-law Nina Robertson; six nephews and seven nieces.  They will miss her terribly but remember her always.

A celebration of Katie’s life will be held at 2 PM on Saturday January 27th, 2018 at the Church of St. Martin in the Fields in Chestnut Hill, Philadelphia, PA.  In lieu of flowers, donations can be made to AIM Academy. AIM is a K-12 special education school located in Conshohocken that has been transformational for the Talbots’ oldest son Jimmy.  The Talbot family will be working with AIM toward establishing a scholarship in Katie’s honor.  Any donations will go toward that initiative.