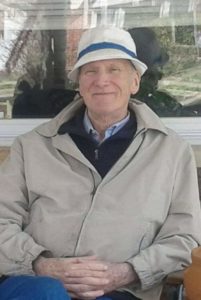 William W. Haasz, Jr, 85, of Erdenheim, PA, passed away peacefully at his home on October 18, 2018.  He was the beloved husband of the late Mary Haasz (nee Matusevich), devoted father to eight, adoring grandfather to 23 and loving great grandfather to six.

Born in Philadelphia, PA, Bill was the eldest son of the late William W. Haasz, Sr and the late Ellen Haasz (nee Quenzer). After graduating from Dobbins High School in 1951, he began a four-year structural steel drafting apprenticeship at Belmont Iron Works. He joined the US Army in 1953, serving 2 years stationed in Germany and attaining the rank of Corporal.  When his military service ended, he returned to Philadelphia, completed his apprenticeship and launched his 58-year career as a miscellaneous steel draftsman and estimator.  Bill retired in 2009 from Central Metals, Camden, NJ.

As a member of the Frankford Presbyterian Church, Philadelphia, PA, he sang in the choir for over 55 years, rarely missing a Sunday service. His love of music filled his life and the lives of those around him.  He was a member of the barbershop quartet, The Checkerboard Squares, part of the Quaker City Chorus, for nearly 30 years.  They performed competitively for many years. Even when his barbershop quartet years ended, he was a regular vocalist at family occasions: weddings, graduations, anniversary parties and funerals.

Relatives and friends are invited to Bill’s visitation on Thursday, October 25th, from 9:30am to 11:30am at Oreland Evangelical Presbyterian Church, corner of Church and Paper Mill Rds. His funeral service will follow at 11:30am.  The internment will be at Ivy Hill Cemetery, Philadelphia, PA.  In lieu of flowers, contributions in Bill’s name may be made to The Michael J. Fox Foundation for Parkinson’s Research or the charity of your choice.