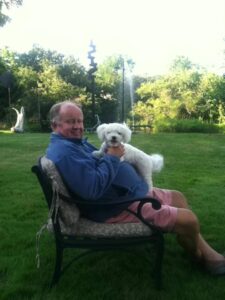 It is with profound sadness we announce the passing of Mr. William Peter Ridgway Cross of Blue Bell, Montgomery County, Pennsylvania. Peter, a beloved husband, father, uncle, and caring grandfather left this earth Tuesday, December 29th, 2020, in Philadelphia at the age of seventy-nine.  We are comforted that Peter will be met in Heaven by his groundbreaking father, Mr. William Peter Cross (Bill) and mother, Mrs. Inez Papall Campbell both of Philadelphia, his beloved daughter, Audra and his sister, Ms. Balene McCormick.

Peter is survived by his beautiful wife, Mrs. Lee Carol Cross. Peter will be missed by his four children and their spouses, daughter, Mrs. Samantha and Mr. Joseph Hobbs; son, Mr. Peter Ridgway and Mrs. Meg Cross; son, Mr. Steven and Mrs. Meredith Cross; daughter, Mrs. Allison and Mr. Noah Lieske, and his cherished companion pet Coco, who is now in the loving arms of his family.

It is difficult to present a life so large and accomplished without missing a moment touched, built, or explored by Peter. Peter enjoyed a wonderful childhood exploring the Potomac and Hudson Rivers and the Chesapeake Bay.  He set sail as a young boy from the quiet streets of Chestnut Hill, Philadelphia where he was educated at Chestnut Hill Academy in the class of 1959. During those spring and summer breaks of the 1950’s aboard the family yacht, the “Christmas Tree”, his character took root.  Peter’s parents inspired creativity and adventure in both of their children throughout their lives. The family mapped, fished, hunted, and camped along the way. Peter’s mother, Inez’s pots and pans mingled with the ship’s sails lines.  Peter’s lifelong love of the ocean began in these special times.

Peter’s Father, Bill Cross would become Vice Commodore of the Corinthian Yacht Club. Peter would one day marry his beloved Lee in a lavish winter ceremony surrounded by friends and family. Peter enjoyed his life long membership there deeply.

Enlisting in the Navy after attending Pennsylvania State University, Peter was stationed at the Nuclear submarine outfit in New London, CT. In the Navy, Peter’s imagination and engineering education progressed. After his military service, Peter founded the Electric Corporation of America which led to a successful career as a designer, builder, engineer, entrepreneur, and later real estate developer.

At work Peter was aggressive, creative, and successful. However, in family and friendships Peter was known to be a private person. Those that had the enjoyment of his shine even briefly, were treated to his humor, ideas, and generosity. Peter and Lee hosted many friends at their home, Featherfield Farm in Blue Bell, weekends at their bayfront summer home in Ocean City, NJ, sailing trips around the British Virgin Islands, and winter adventures on their yacht The Argosy hailing from Palm Beach. The Argosy would cruise the Palm Beaches, The Chesapeake Bay, New York City, Maine, and their forever favorite, Nantucket Island. Peter and Lee continued to host friends and their growing family to beach sunsets at their beautiful winter home in Naples.

Peter’s passions were always first as a husband and father, then a businessman and friend. Separately, Peter held in high regard his positions as a Navy Veteran, Freemason, and Yachtsman. Peter was a member of St. Thomas’ Church in Whitemarsh, PA, The Corinthian Yacht Club, The Philadelphia Cricket Club and the Philadelphia Aviation Country Club at Wings Field.

It is with great sorrow that our entire family says goodbye. We will forever rejoice in our loving memories and continue to be inspired by his life of creativity and love of work.

In a private GRAVESIDE SERVICE, Peter was laid to rest with a final salute on January 2, 2021, in St. Thomas’ Episcopal Church Cemetery in Whitemarsh, PA.