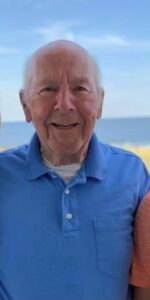 Born in Philadelphia, PA on December 15, 1934 to Richard and Viola (Vee) Brehm, Bill and his wife  Joan Downs Brehm raised three children, William Brehm, III, Diane (Darryl) Frickey and Meredith (Alex) Canaan in Ft. Washington, PA and Ocean City, NJ.  Bill was blessed with four grandchildren: Amelia and Andrew Frickey, and Annastasia and Margaret Canaan, who all called him PopPop, a name he cherished above all.

He was preceded in death by his wife Joan, his parents and his brother Dick Brehm, all of whom he missed dearly.

Bill grew up in Philadelphia and attended the William Penn Charter School back in the day when it was still all boys.  After graduating, he headed south attending North Carolina State University where he was a member of the Sigma Alpha Epsilon fraternity.  He then proudly served in the Air Force until 1959, stationed at Tyndall Air Force Base in Panama City, Florida, rising to the rank of Captain.

He returned to the Philadelphia area, met and married Joan and raised his three children.   He was a printer, owning Pennsylvania Printed Products, and as a second career he worked at Bentley Systems in Exton, PA. He initially retired to Ocean City, New Jersey before moving to St. Pete Beach, Florida.

He loved to read, play backgammon and tell stories, preferred blueberry pie for birthdays, never passed up an opportunity to eat dessert or have a pre-dinner cocktail, built forts in his back yard and dug sandcastles at the beach for his kids and grandkids,  had an incredible train collection, owned every tool known to man (usually in duplicate), and was blessed with wonderful friends.  His children and grandchildren miss him dearly.

Services for Bill will be held on Saturday, February 27, 2021 at the Craft Funeral Home in Glenside at 11 am.  Entombment will follow at West Laurel Hill Cemetery in Bala Cynwyd, PA.  A Zoom option for the service is available.

In lieu of flowers, please consider to donating to the Musella Fondation for Brain Tumor Research, a charity dear to Bill’s heart in honor of his wife Joan, at virtualtrials.org/Donate.cfm.