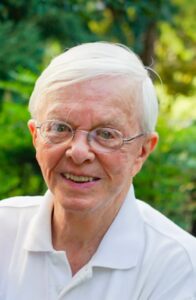 Tom McCrea was born on September 29, 1928 at the Francis Cope House in Awbury Park in Germantown. He was the son of William “Billie” McCrea and Mary “Mollie” Johnston McCrea. Tom had an idyllic childhood, living in the Cope House and playing in the park.

Tom attended Germantown High School and served in the Army and Navy from 1950 – 1957 , stationed in Germany. After his service, he returned to Philadelphia and started working in the insurance business during the day while going to school at night, earning his bachelors degree from LaSalle College and eventually his CPCU, equivalent to a masters degree in property-casualty insurance. Tom began his career with Wasau, and later started his own well-respected insurance firm: McCrea and Gallen.

He was a devoted and loving father, grandfather, and great grandfather. He was proud of his family, and avidly kept up with his children’s and grandchildren’s activities and interests. Tom was also an enthusiastic fan of the Eagles, Phillies and Penn State. He also enjoyed watching high school sports games at local schools in Montgomery county, including games where his son-in-law coached and grandson played.

Tom was an active member of Old York Road Country Club for over 40 years, and was proud that he “shot his age” in golf when he was 91 years old. Tom was known for his articles for the Club newsletter, often focusing on history, medicine, and health. Tom was an excellent emcee and speaker, speaking with humor and intellect on virtually any subject. He oversaw the annual Veteran’s Day observance at the Club, where he was accompanied by his two older WWII veteran brothers while they lived.

Tom was the youngest of his 5 siblings, and was predeceased by Margaret Goodman, Anna May Graham McCluney, William Johnston McCrea, Francis McCrea and Eileen Knorr, as well as his wife Shirley, sons Howard and John. He is survived by beloved daughters and sons-in-law Kim & Glenn Dolton, Julie & Chip Swanson, son Douglas, his seven grandchildren, and his one great grandchild.

Relatives and friends are invited to Thomas’ Visitation Saturday 12/3 11:30am to 12:30pm, with service immediately following at the New Life Presbyterian Church 2015 Limekiln Pike, Dresher, PA 19025. Interment Private. In lieu of flowers, contributions in Thomas’ name may be made to the Delaware Valley Golden Retriever Rescue https://dvgrr.org/shop/donation/.