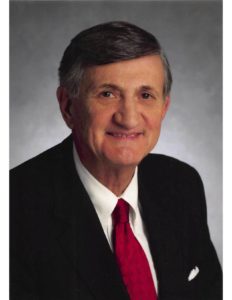 Thomas B. Morris, Jr., 83, a long time resident of Chestnut Hill, Philadelphia, and former law partner and chairman of the Philadelphia firm, Dechert LLP, died Thursday, May 14th, after a valiant battle with Lewy body dementia.

Tom joined Dechert after graduating from Harvard Law School in 1962. In 1968, he opened Dechert’s first international office in Brussels, Belgium and served as the Consul of Belgium in Philadelphia from 1974 to 1989. His legal practice involved advice concerning a broad range of corporate matters, particularly related to international organizations.

A graduate of Princeton University, Tom was awarded the Roper Trophy, the University’s highest athletic award and won six letters in football and baseball. In 1957, he earned the Maxwell Award, given to the best college football player in the country for his winning performance against Colgate where he scored three touchdowns and threw for a fourth.

Tom was a member of Pine Valley Golf Club, Sunnybrook Golf Club, The New York Athletic Club, The Philadelphia Club, The Racquet Club, and The Athenaeum of Philadelphia. An avid skier, Tom and his family spent their winters in Sun Valley, Idaho, where he was always in search of the perfect turn.

Tom is survived by his wife and best friend of 57 years, Ann Peirce Morris, and their three children; Lauren Ayres O’Connell (James O’Connell), Thomas Bateman Morris III, Richard Trevor Morris (Alice Tasman Morris), and four grandchildren; Julia, Jack, Clay, and Louisa. Despite a lifetime of professional accomplishments, Tom considered his family his greatest success. Due to the Corona virus, a memorial service will be held at a later time to be determined.

In lieu of flowers, donations may be made to the Tom Morris ’54 Alumni Memorial Scholarship fund at Columbus Academy, 4300 Cherry Bottom Rd, Gahanna, OH 43230, or to the Free Library in Philadelphia https://freelibrary.formstack.com/forms/donation.