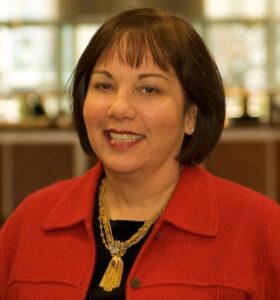 Sherry Ruth DeGenaro Guy of Flourtown, PA, born November 9th, 1956, in Cherry Point, NC, passed away peacefully on January 7th, 2023, after the return of breast cancer. She is preceded in death by her parents, Geraldine Ruth Walker DeGenaro (1933-2014) and Arthur P. DeGenaro (1933-2015), and her sister, Christine “Chris” Beth DeGenaro (1954-2010) (Larry) Hoffman, in heaven.  She is survived by her loving children, Emily Celeste Guy (27) and Edward Thomas Guy IV (23), and Edward Thomas Guy III (div. 2022) and her two sisters whom she loved dearly, Nancy Jean DeGenaro (James) Harry of Pittsburgh, PA and Rosanne DeGenaro (Ron) Shaw of Phoenix, AZ, and her many nieces and nephews.

She graduated from Mansfield High School (1975) and earned a dual degree in Elementary Education/Special Education from Mansfield State College (1979). During high school, Sherry became Alvin and Sally Shoemaker’s “summer girl” taking care of their four kids. Having been welcomed into Al and Sally’s home in Chatham, NJ, her bond with the Shoemakers, led to a cherished lifelong friendship with the family. After college graduation she was given the opportunity to work in NYC, seeding her professional interest in finance on Wall Street. Off to Chatham NJ it was – she moved in with the Shoemakers temporarily until moving to the city to continue to pursue her financial career working on Wall Street in The Big Apple.

Working for many financial companies from Blyth Eastman Dillon, Paine Weber, Merrill Lynch, to her owning her own business, Sherry’s entrepreneurial leadership was inspiring for many, particularly young women entering the corporate financial workforce.  There was never any doubt that Sherry would become her own boss. Yet anyone who knew Sherry would know that there was much more to her life than her career.  As a dedicated athlete, she shined on the ski slopes, tennis/pickleball courts, and golf course, even after two kids and two knee replacements. She truly loved life and was excellent in making sure those around her saw the beauty around them as well.   She was forever caring for others, and this is how she most notably shared her love for God, listening, assisting and supporting those in her life. We know that many experienced her caring touch.

When it became time to start a family, Sherry naturally returned to Chatham and gave her husband at the time, Ed, the choice of borough or township. She raised her family there and was an enthusiastic dance and hockey mom. Her support continued as Emily moved to Elon, NC for undergrad, Thailand to teach, and Marietta, GA for chiropractic school and Tommy moved to Syracuse, NY for undergrad and his master’s degree. Sherry was their biggest fan and loudest cheerleader at each of their graduations.

In 2017, she learned she would need to fight breast cancer. Her optimism was admirable and fierce, as she never doubted her strength or her faith. She went into remission in mid-2018 and came out on the other end much stronger than before. Sherry’s appreciation for those who supported her during that time is difficult to put in words but felt by many.

Sherry loved her children Emily and Tommy. She was able to travel the world with both as they visited places including Egypt, Australia, and Thailand together and watched them get settled in their respective cities of Atlanta and Boston. Sherry’s humor and wit rippled through every interaction she had, up until the very end. Sherry was a light in this world, one that touched many people. Her memory lives on and is celebrated by Emily, Tommy, her extended family, those who loved her dearly.

Relatives and friends are invited to Sherry’s funeral service Saturday 1/14. Visitation hours are between 9 am to 12 PM at, Craft Funeral Home of Erdenheim, 814 Bethlehem Pike, Glenside, PA. Her funeral services will begin at 12 noon followed by a light reception. Interment Private. Sherry’s memory may be honored via contributions in her name made to The Breast Cancer Research Foundation, 28 West 44th St, Suite 609, New York, NY 10036.