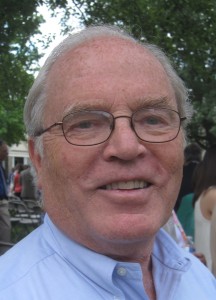 ROGER McCLEAN EASTLAKE, 73, of Fort Washington died March 4, 2015 at Keystone Hospice from brain cancer.  He was diagnosed in July 2011 as he was about to begin his final year of teaching prior to enjoying retirement. He graduated from Germantown Academy in 1959 and from Princeton University in 1963.  He taught at Montgomery School, in Wynnewood, and then in 1966 he was recruited to join the faculty of his Alma Mater at the new campus in Fort Washington.   While at GA he served as the first full time Director of Admissions.    In 1973, he was asked to establish a formal office for College Counseling, where he spent the next 38 years prior to his retirement in 2012. In a letter to the school community, Germantown Academy’s Head of School, James W. Connor, is quoted, “The vast majority of Roger’s life was spent at Germantown Academy, either attending as a student or serving as a teacher, a coach, and an administrator.  In addition, Roger served as President of the Alumni Board, directed the Summer programs, taught Upper School English, coached football, and, in his spare time, he edited The Patriot.  In the service of his Alma Mater, for Roger, no task was too large or too small to engage with enthusiasm.  Roger’s instinct to feel genuinely happy for the success of others is the trait of his I admired most. ”  Throughout the three and a half years of his brain cancer illness, his daily life became compromised which granted him ample reason to change his forever optimistic disposition.  In his final months his illness prevented him from being understood when he tried to speak, though his thought process was clear.   Roger never allowed his challenges to compromise his spirit nor deny family, friends, aides, nurses, and hospice staff the pleasure of his radiant smile and sense of humor!   After forty-nine years as an educator, he continued to teach all around him how to meet life’s challenges with the greatest strength and dignity as he was dying. He was passionate about being outdoors. Whether he was riding his bike in the MS 150, gardening, or taking his usual 3-mile walk a few days a week after leaving the office, he simply craved finding any reason to be outside to appreciate the beauty of nature.  No day ended without a crossword puzzle being completed and then a few chapters in a book to quench his lifelong thirst for reading.   His heart and soul was fueled by his love for his family, friends, colleagues, and his students. He is survived by his wife of 48 years, Cynthia MacColl Eastlake, his daughter Emily Evans (Thomas G. Jr), and his son Peter McClean Eastlake (Maya Elmer).  He is survived by his beloved grandchildren: Molly, Lucy, and Will Evans, and Parker and Sage Eastlake.   He was pre-deceased by his mother, Katherine, and step-father Stephen F. Brogan. His memorial Service will be held on Saturday June 6th at 11 A.M. at St. Thomas’ Church Whitemarsh, 7020 Camp Hill Rd., Ft. Washington.   In lieu of flowers, contributions in Roger’s name may be made to Jefferson Brain Tumor Research, ATTN Dr. David W. Andrews, MD, 925 Chestnut St, Suite 110, Phila, PA 19107