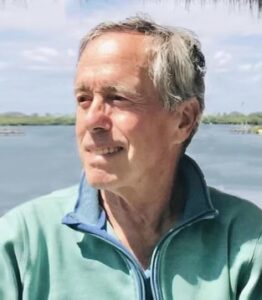 Robert Nelson “Bob” Spahr died on November 30, 2022, surrounded by his loving family and caregivers after a long, courageous battle with Parkinsons Disease and Lewy Body dementia. He was 84.

Born in Philadelphia PA, on September 15, 1938, Bob was the son of Christian C. F. Spahr and Margaret Elizabeth N. Spahr and resided in Rosemont, PA. He graduated from the Haverford School in 1956, and Trinity College, Hartford, CT in 1961. In his senior year at Trinity, he met his wife of 60 years, Julie Darling Spahr, on the steps of Psi U. He swept her off her feet, and they married after her freshmen year at Vassar College.

Bob served six months in the Air Force in 1962, followed by six years in the Air National Guard.

Professionally, he was in sales for National Publishing Co., and then bought and managed his own edition bindery, Murphy-Parker. Bob excelled in production and manufacturing. They handled medical textbooks, yearbooks and high-quality leather bindings.  Later he joined the family partnership of Lea and Febiger as Production Manager.  Spirituality always played a big role in his life and after retiring, he studied energy healing. He went on to found the Spring Haven Center for Healing Arts in Malvern.

He was a long-time member of the Board of Trustees at Shipley School, an elder at Gladwyne Presbyterian Church and the President of the Little Bushkill Rod and Gun club. He also was a member of Merion Cricket Club, Gulph Mills Golf Club, and The Rabbit.

Always active, Bob excelled at squash, skiing, tennis and speeding around in his boat through the waters of Maine! He was also a highly skilled and passionate bridge player. His greatest love was fishing, especially for trout and salmon, which he did all over the world. He took great pleasure in teaching all his daughters and grandchildren the joys of fly fishing and the outdoors.  His deep connection with all of his dogs is well known, but Rocky was his support until the end. Bob grew up summering on Mount Desert Island, Maine, and one of his greatest gifts to his family was introducing Julie to this special place.

Together, they created a family home in Latty Cove, ME that will be enjoyed by generations of Spahrs to come.

He is survived by his wife, Julie, his four daughters and their husbands, Becky and Graeme Frazier, Ginny and Matthew Keator, Stephanie and Serge Pepper, Noel and Dave Cappillo, as well as, his eleven grandchildren: Quint, Liza and Ali Frazier, Carson, Amanda and Ryan Keator, Grace and Oliver Pepper, and Maddie, Kaitlyn and Chris Cappillo.

In lieu of flowers, donations can be made to the Michael J. Fox Foundation, www.michaeljfox.org, and the Lewy Body Dementia Association www.lbda.org