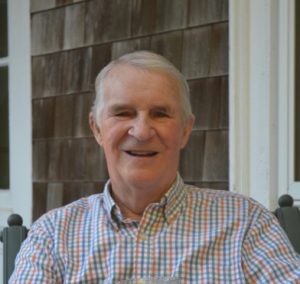 Robert H. Roak, known to his friends as Jake, and Papa Jake to his grandchildren, passed away on December 30, 2019. He was the beloved husband of the late Elizabeth C. Roak, who passed away just hours after Jake. They lived their lives fully and inspired in the service of others and shared their love of family, country and church with all of us. They just celebrated their 56th wedding anniversary. Jake was born in Philadelphia on June 2, 1937, he was the son of the Reverend John C. Roak and Marian S. Roak. He had three siblings who predeceased him, John C. Roak, David B. Roak, and Christina R. Chalfen. His early education was at the Episcopal Academy and the St. Paul’s School in Concord , NH. He earned his Bachelor’s degree in English at the University of Pennsylvania where he was a member of the Delta Phi Fraternity. Subsequently he earned a Master’s degree in German from the University of Colorado. From 1955 to 1964 he proudly served six years in the Pennsylvania National Guard and two years of active duty in the United States Marine Corps. He was a member of the First Troop Philadelphia City Cavalry. Through the Troop he was awarded a John Boyer Fellowship to study at the Goethe Institute in Germany where his interest in German language and culture was peaked. He was a scholar, a teacher, and a coach. He was a committed educator teaching German, coaching lacrosse and ice hockey at the William Penn Charter School and The Hotchkiss School in Lakeville, CT. He read widely, took an interest in a variety of subjects and disciplines, and nurtured the potential of every student. He was granted three Fulbright Teacher Exchange Awards to Germany and Switzerland where he developed a network of friends that were the catalyst for a youth exchange program that exposed his family and students to people from around the world. His mission was to cultivate an understanding of other cultures and the values they hold dear. He taught people to listen, to explore, to compromise. Jake’s retirement was defined by family, friends and helping those less fortunate than him. His volunteerism was distinguished by compassion, a generous spirit, and a calling to do more. For a time he was a committed full-time volunteer at Project Home; with Betsy he started an after school tutorial program at the Mattie N. Dixon Community Cupboard; and post Katrina, with the help of friends, raised enough money to buy two house trailers and tow them to New Orleans for use by those recovering from the catastrophe. An active parishioner at Saint Paul’s Episcopal Church for almost 50 years, Jake was especially committed to outreach projects dedicated to fighting hunger and homelessness with faith and courage. His efforts included work with the Interfaith Hospitality Network, which helps homeless families become eligible for permanent housing and Face to Face, a multi-faceted social service organization in Germantown. Jake loved time with family and friends and nurtured those relationships. He greatly enjoyed and was loyal to a number of friend groups including The Rabbit, The Marigolds, The Book Boys as well as a regular at Saint Paul School, University of Pennsylvania, St. Elmo and First City Troop alumni events. Jake enjoyed living “life the way it should be “ when in Maine each summer, motoring on his boat, hauling things in his red pick up truck, tinkering in his woodshop, studying family histories, sitting by a crackling fire, rooting for the Phillies, playing Old Timer Hockey at the Wissahickon Skating Club, enjoying time with his grandchildren, and most of all delighting in life, side by side with Betsy. Together they advanced a family legacy and made a huge difference in the lives of their children and grandchildren. They will be missed. Jake was a loving father to Christopher (Amy) Roak, Jennifer (Bruce) Edgerton, and Lisa (Michael) Budd and grandfather of Maddie Roak, Liv Roak, Rob Roak, Brodie Edgerton, Isabel Edgerton, Merrick Edgerton, Maida Budd, Charlie Budd and Patrick Budd. Relatives and friends are invited to Jake and Betsy’s Memorial Service, Friday January 10th at 2pm at St Paul’s Episcopal Church, 22 E. Chestnut Hill Ave. Philadelphia, PA 19118 and a reception in honor of Jake and Betsy following the service. Memorial gifts in honor of Jake may be made to St. Paul’s Episcopal Church Outreach Fund, 22 E. Chestnut Hill Ave. Philadelphia, PA 19118.