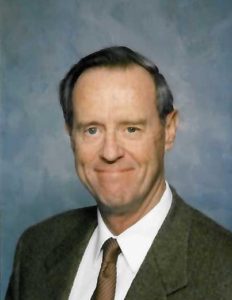 Robert Calhoun McGrory (January 10, 1935 – July 16, 2020), age 85, died after a sudden illness at Jefferson University Neuroscience Center. He was born in Philadelphia to Mary Edith (Calhoun) and George Frances McGrory and raised in Mt Airy.  He will be interred at Washington Crossing National Cemetery after a private family service.  Family and friends will be invited to celebrate his life when circumstances permit.

Bob graduated in 1952 from Central High School in the 198th class. An engineering major at Lehigh University, he was a leader in the Air Force ROTC and the Kappa Alpha Society, graduating in 1956. He maintained many lifelong friendships through his long-time alumni leadership.

He met his wife Carolyn on a blind date when they were 17 and they married after graduation. He served six years on active duty in the US Air Force flying B47s for the Strategic Air Command. He then joined the reserves during which he mentored young people considering the Air Force Academy, and retired as a Lt. Colonel after 27 years.

After his time on active duty, Bob returned to engineering and, on a business trip to New York, learned that Pan American World Airways was hiring pilots. He flew with Pan Am for 25 years, rising through the ranks to become a 747 Captain. He loved exploring unique places all over the world. During the Cold War, the family lived in West Berlin surrounded by the Wall.  They traveled throughout Europe, often in an elderly VW camper, instilling a love of travel and adventure in their children and then grandchildren.

Bob lived with gratitude and in service to family, friends, community, and country. He was an active member of St. Philip in the Fields Episcopal Church for more than 50 years and more recently St. Peter’s Church, Glenside. He loved choir and singing, starting as a seven-year old boy soprano. He had the unique ability to see through complicated scenarios and come up with a solution. His lifelong interest in finance included service on numerous boards, including the Montgomery County Historical Society. Bob was a long-time Rotarian where he chaired the Polio Plus campaign. He was active in Republican politics, serving in Springfield Township for more than 50 years, with ten as a Township Commissioner including a term as President.

Bob loved hosting family and friends on Long Beach Island where he taught several generations the fine art of telling stories, investing, counting waves, and bodysurfing. Notorious for “pulling a McGrory” – any activity that involved complicated logistics, often with long drives in his big station wagon – Bob would travel almost anywhere to get together, help out, dog-sit, and cheer on his grandchildren. During the past nine years he embraced life at The Hill at Whitemarsh, where he chaired the Military Committee.

Bob was a loyal, loving, generous, and fun husband, father, grandfather, uncle, and friend.  He is survived by Carolyn, his beloved wife of 64 years, children Melanie McGrory and Henner Schröder of Chimacum WA, Elizabeth McGrory and Ric Plaisance of Nyack NY, Bob McGrory and Laura Van Wie McGrory of Centreville MD, grandchildren Adrian, Daniel, Ian, and Maya, and many loving and loved nieces and nephews.  He was predeceased by his parents, brother George, and infant sister Marilyn.   His extended family and many friends will remember his big smile and warm hugs with love and will miss him always. In lieu of flowers contributions in Bob’s name may be made to Peter’s Place, A Center for Grieving Children https://petersplaceonline.org.