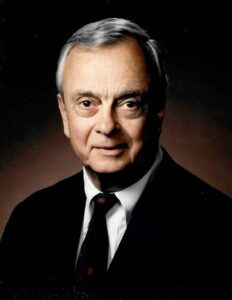 Robert Campbell McAdoo died peacefully Thursday, August 26th in Bryn Mawr, PA. He was 100 years old. Bob was born in Philadelphia in 1921 to Walter Campbell McAdoo, Jr and Dorothy Brown McAdoo. He graduated in 1939 from the William Penn Charter School where he was President of his class, co-captain of the varsity football team and a leading scholar. In 1943 Bob graduated from Amherst College where he was a member of Psi Upsilon and elected to Phi Beta Kappa in his junior year. He then served as a Naval Officer until 1946 when he attended the University of Pennsylvania Law School. There, he was an Associate Editor of the Law Review. Upon graduation from law school, Bob worked at Duane Morris, then the Baldwin Locomotive Company before joining Morgan Lewis & Bockius where he was a Partner until his retirement in 1980.

Bob led a very active life both professionally and personally. Bob was a past president of the Merion Cricket Club and Gulph Mills Golf Club. As well, he was a past president of the Orpheus Club where he was a member for 59 years. This made him both the longest serving member as well as the oldest member of the Orpheus Club. Bob was also a member of The Rabbit. There were very few institutions as dear to Bob as the Penn Charter School. During his years at Penn Charter, Bob lettered in football, basketball, baseball and track. He was awarded the Alumni Award of Merit upon graduation in 1939. In 2001, Bob was elected a member of the Penn Charter School Athletic Honor Society. He was also president of the Penn Charter Alumni Society, as were both his father, Walter C. McAdoo Jr and his son, McKinley C. McAdoo. To date, no other family has held that distinction.

Bob was an active tennis and squash player and nothing gave him more pleasure than a round of golf with his family large and small. The most special evenings were spent with his family singing rounds and college songs around the dinner table on warm summer nights.

Nearest to Bob’s heart were his family and grandchildren, all of whom regarded time with Granddad as special and always looked forward to his signature bear hug.