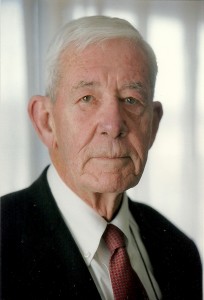 Richard Ross “Dick” Neely, Jr., 93, of Flourtown, died at Chestnut Hill Hospital on Friday, May 27. He was born in 1923 in Bangor, Northern Ireland, to an Irish mother and an Irish-American father. His parents met while Dick’s father attended boarding school at Coleraine in Ireland. The family, including a sister Yvonne, born in 1922, came to Philadelphia that same year aboard the SS Haverford and in 1928 settled in Whitemarsh.

Dick and his sister Yvonne both graduated from Springfield (Mont. Co.) High School in 1940.

Dick enlisted in the army at the outbreak of World War II, but after marching through the streets of Allentown was declared ineligible (4-F) owing to a childhood accident. He instead worked for the War Department Army Signal Corps in Philadelphia, preparing graphs and illustrations for officer training classes. He later worked on the drawings for a radio equipment processing facility under the direction of Philadelphia architect Harry Sternfeld.

After the war, Dick joined Sternfeld’s architecture firm and began a long career as an architect. Over the years as an employee, partner, and proprietor of different firms, including the firm of Mirick, Pearson, Batcheler, he worked on many large commercial and institutional projects. These included the Germantown Jewish Center, the Eastern Pennsylvania Psychiatric Institute, Friends Select School, the College of Physicians, Medford Leas Retirement Village, Cathedral Village, the Athenaeum, and the University of Pennsylvania, among many others.

With his kindness and sense of humor, Dick most enjoyed his time with friends, family, and those in the community. He especially enjoyed time spent at a house in Beach Haven, NJ, built by his father, where family and friends gathered over his entire life.

He is survived by his wife of 48 years, Sue; his children Mary Susan Wetherill, Richard R. Neely III, Thomas Neely, and Charles Neely; daughters-in-law Erin and Judy; and two grandchildren.