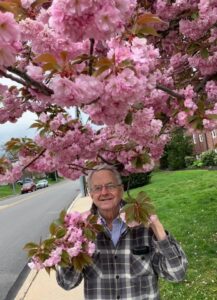 Born in Abington, Pennsylvania to the late Mary Taylor Stover and Carrell Jack Stover. Brother of Sydney Raihall (nee Stover).  Dick grew up in Abington township and was a 1959 graduate of Abington High School. He attended Temple University where he received an associate degree in mechanical design. He joined the United States Navy in 1959 and following his graduation from Temple, he did his two years active duty. Dick was stationed at Naval Air Station Lemoore, California. He did two six month cruises on the USS Coral Sea CVA43. Prior to leaving on his first cruise, Joyce and Dick were married at the naval air station.

Following his tour of duty with the Navy, he became a manufacturers representative for McWilliams Forge for over 30 years.

The Stover’s were residents of Erdenheim and Glenside from 1968-2019. While in Erdenheim, he was a member of the Erdenheim Civic Association and a trustee at Oreland Presbyterian Church. His love of trees and plants led him to become a volunteer tour guide at the Morris Arboretum in Chestnut Hill, PA for 20 years. It was at the Arboretum that he felt happiest. A few years back, he had been chosen to lead a golf cart tour for a man and wife. He showed them the entire Arboretum. At the end of the tour, the couple thanked Dick and then revealed that their names were Chuck and Victoria Yeager. Chuck Yeager was the first pilot in history confirmed to have exceeded the speed of sound in level flight. To say this was an honor to have given Yeager this special tour is an understatement and one of Dick’s proudest moments.

Dick’s many hobbies included photography where he had a dark room in the basement and loved shooting in black and white. He was a self proclaimed handyman who repaired, built, fixed, and hung pictures perfectly. In his younger days, he loved riding his Honda Nighthawk and taught both children how to ride. He owned a ’65 Corvette convertible and enjoyed attending car shows from time to time. He loved rock and roll music and Flyers hockey. In 1975 he owned Flyers season tickets when the Broad Street Bullies won the Stanley Cup.

He and his family enjoyed homes in Locust Lake Village in the Pocono mountains with the Ritter family as well as most recently in Ocean City, New Jersey for the past 33 years.

Relatives and friends are invited to Richard’s Memorial Service Tuesday June 8, 11am at Flourtown Country Club, 150 McCloskey Rd., Flourtown. Those wishing to pay their respects, please join the family at the conclusion of the service around 12 noon. A luncheon will follow. Interment Private. In lieu of flowers, donations can be made to the Leukemia and Lymphoma Society https://www.lls.org/ , the Morris Arboretum https://www.morrisarboretum.org/ or the Travis Manion Foundation https://www.travismanion.org/