The Reverend Frederic B. Geehr 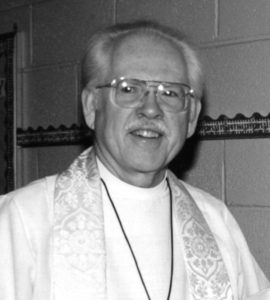 The Rev. Frederic B. Geehr

At. St. John’s, Rev. Geehr helped the congregation develop a vision for its future and later relocate to a new building.  At Hope New Castle, he helped stabilize a struggling mission congregation, enabling it to build a parsonage and its first church sanctuary, while retiring its church site debt, and increase its membership.  At Zion Flourtown, Rev. Geehr lead the renovation of its worship space including lighting and stained-glass windows.

Rev. Geehr was an advocate for the at risk and marginalized in our society.  While at Hope in Delaware, he served on the Citizens Advisory Council.  While at Zion Evangelical in Flourtown, he was the founding Director of the Family Action Council of Springfield Township and a member of the township’s Drug and Alcohol Abuse Task Force, focusing on teen alcohol and drug abuse.  Rev. Geehr lead Zion’s outreach efforts in many areas: initiating a program for self-care skill development for Downs Syndrome children expanded by the Montgomery County Association for Retarded Children (MARC) it to several other suburban locations; establishing Kindercare, a preschool program for children ages 2 to 4; sponsoring housing for adolescent “runaway” children; resettling at least 3 Indochinese refugee families; and hosting a satellite pastoral counseling center.  He was an early advocate for ecumenical outreach and engaged in Lutheran-Roman Catholic dialogues with the local Augustinian parish (St. Genevieve’s Church).  This outreach later expanded to other Bethlehem Pike congregations and his election to represent the Synod on the Executive Board of the Metropolitan Christian Council of Philadelphia.  St. Genevieve’s Augustinian priest would offer the homily at Rev. Geehr’s 25th Anniversary of Ordination.

Rev. Geehr also served the larger Lutheran Church as a district dean, a member of the Department of Metropolitan Ministry of the Council of Churches of Wilmington and New Castle County, as Secretary of the Delaware District of the Maryland Synod.  He was an Executive Board member of the Southeast Pennsylvania Synod, and served on the Synod committees on discipline and the constitution.  He was also a member of their team consulting with congregations suffering serious internal conflict as well as a member of the Board of College Education and Church Vocation of the Lutheran Church in America, which evaluate the church’s 18 colleges.

Perhaps most notably, Rev. Geehr was known for his exceptional baritone voice, which graced several regional choirs and every Sunday’s liturgy in each church he served in over his 50 years of ministry.

Relatives & friends are invited to his funeral service, Friday 11 AM in St. Peter’s Lutheran Church, 211 S. Main Street, N. Wales, PA 19454, where friends may call Friday 10-11 AM.  Interment Union Cemetery.  In lieu of flowers memorial contributions in Pastor’s name may be made to the Alzheimer’s Association, 399 Market St., Suite 102, Phila., PA 19106