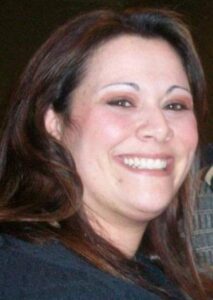 Renee (Rizzo) Hertzog (age 44) of Mont Clare, Pennsylvania earned her angel wings on December 29, 2020 after a courageous and long eight year battle with cancer. She refused to let her disease define her as evidenced by her sheer will to live to remain with her family and friends. She was a woman of faith and strength and an inspiration to all who knew her.

Renee was the devoted wife to Joseph “Scott” Hertzog for 20 years, and most importantly, a proud and loving mother to their beloved son Jordan R. Hertzog. Renee called Scott and Jordan “her babies,” and no matter how old or tall Jordan became or how sick Renee eventually felt, the three of them spent countless hours cuddled together watching movies. Scott shares, “Renee’s smile lit up the room and never faltered once with all of her pain.”

Renee was the cherished daughter of Judith Romano Ferreri and her late father Harry (Homer) Rizzo, as well as her late stepfather Robert Ferreri.  One of three siblings, Renee was a caring and loyal sister to Michelina Ferreri and the late Robert (Rob) Ferreri,  the adored granddaughter of Marie and the late Albert Romano and the late Americo ( Joe) Rizzo and Delores Wolf. Renee will be missed by her many aunts, uncles, and cousins; and her family believes that  her Pop, Daddy, Dad, and Rob are greeting her with open arms and ushering her into a place filled with light and peace. She will never be in pain again. Renee graduated from Norristown High School and The Chubb Institute of Computer Technology.

Renee loved arts and crafts, especially coloring. While she also enjoyed traveling, her most favorite place to be was at the beach, namely at their shore house in Woodbine, New Jersey. There, she relished in family time, especially with Jordan, and celebrating “girls’ weekends” with her dear friends. In addition, Renee also gave back to the community as a volunteer Fire Police for the Mont Clare Fire Department where she also held the Treasurer’s position and the  Phoenixville Fire Department.

Due to the current circumstances, Renee’s service will be private. The family plans to host a Celebration of Life at a later date. In lieu of flowers, contributions may be made to The Education Fund for Jordan R Hertzog; C/O Scott Hertzog, 119 Meadowview Lane, Mont Clare, PA 19453.