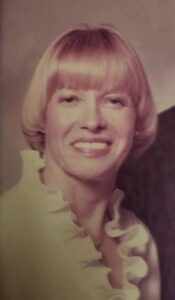 Bertha Reynolds Ridout, known to her family and friends as ‘Pat’, died on November 25, 2020. She was a resident of Meadowood Senior Living Community, Worcester, PA.

Pat was born in Parkersburg, West Virginia on January 9, 1935, the daughter of the late Hess and Elizabeth Reynolds. She was raised on their farm in Mount Zion, WV along with her brother, Eugene. Influenced by her mother, a teacher, Pat attended West Virginia University and graduated with a teaching degree in ‘Home Economics’. She began her teaching career in Baltimore, MD, and while working, attained her Masters +30. She continued teaching in the Family And Consumer Sciences Department of the Colonial School District (Montgomery County, PA) until she retired. Pat enjoyed cooking, entertaining, playing Bridge, and golf particularly on Marco Island where she and husband Robert had a retirement home.

Pat was preceded in death by Robert, her beloved husband of 49 years and Eugene, her cherished older brother. She is survived by three step-children, Bill and wife Cindy, Craig, Linda and husband Marv McKown; six step-grandsons: Dan (wife Katie), Adam (wife Malorie), and Will Ridout, Bill (wife Michelle), Brian and Tim McKown and eight great grandchildren. Pat was a spunky little lady and will be missed by her family and friends.

A graveside service will be held for the family in mid to late summer when all is safe. In lieu of flowers, the family asks that donations be made to the Alzheimer’s Association ( https://www.alz.org ).