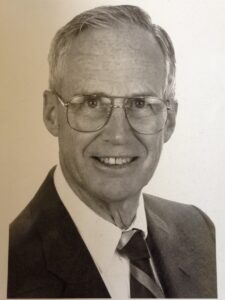 Volunteerism is the hallmark of his life. Bruce was a member of the Oreland Lions Club, served as Whitemarsh Commissioner from 1990 through 1997 and on the library board for William Jeanes Library in Whitemarsh Township. He was deeply involved with SCORE – a group of retired executives who advise small business owners.  Bruce was a faithful and involved member of St. Philip in the Fields, Oreland, where he was a member of the vestry and was rector’s warden. He was an active and dedicated member of the Episcopal Church and was involved with Episcopal Community Services.

Relatives and friends are invited to Bruce’s Funeral Services Monday October 19th, 10am, at the Church of the Messiah, 1001 Dekalb Pike, Lower Gwynedd, PA 19002. Where friends may call 9:30 to 10am. In lieu of flowers a donation can be made in his memory to St. Labre Indian School at Tongue River Rd, Ashland, MT 59003 – a school offering pre-K though 12 education for Native Americans or Episcopal Community Services at 225 3rd Ave., Philadelphia, PA  19106 – offering the community services to reduce intergenerational poverty, achieve economic independence, and positive life changes.