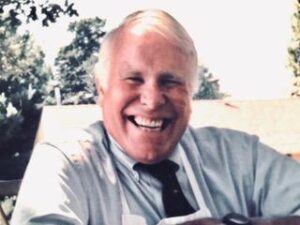 Norris Vaux Claytor, aged 81, beloved husband of Virginia, died peacefully on August 8, 2021 at his home in Radnor. Norris was predeceased by his parents Richard and Mary Claytor (née Ingersoll), his brother Thomas Claytor, and his grandson Trey Carroll. He is survived by his wife; his sister Mary Ingersoll Smith; his children Thomas, Brannon (Sarah), Cassandra Carroll (Joe), and Warren (Caroline); and his grandchildren Ben, Emily, Sam, Tshering, Pepper, Htet, Ash and Archer.

Norris was born in Philadelphia and attended Chestnut Hill Academy before graduating in 1958 from St. Paul’s School in Concord, NH. While earning his degree in psychology from Ursinus College in 1964, he became a member of the First Troop Philadelphia City Cavalry (founded 1774), a Pennsylvania National Guard unit that has served in every war since the American Revolution. In 1959, he was elected to the active roll and in 1965 was promoted to first sergeant, becoming one of the youngest first sergeants to attain that leadership position at the age of 26.

Professionally, Norris served in the 1970s as executive director for Philadelphia Conservationists and Natural Lands Trust. He then launched his career in health care administration beginning at Pennsylvania Hospital in human resources leadership, then for six years served as vice president for a consulting group where he directed long-range planning for regional hospitals. A young visionary in a dynamic field, he went on to assume roles in executive leadership, first as vice president of strategic planning at Fox Chase Cancer Center, and later as associate executive director of strategic planning for the Hospital of the University of Pennsylvania.  At HUP, he instituted progressive change including joint-venture opportunities that would expand patient access to world-class healthcare, certifications for building the first emergency trauma service heliport, and early organ transplantation.

An enthusiastic conservationist, Norris volunteered his time and energies as a member and officer on multiple boards including Philadelphia Zoo, The Nature Conservancy, Schuylkill River Greenway Association, and Upper Merion Park and Historic Foundation. In Upper Merion, he brought together private landowners and local government to establish a 105-acre nature preserve, now the McKaig Nature Education Center.

Nicknamed “Noddy,” Norris possessed a solid work ethic and fierce independence, which he attributed to being raised on a working farm in Spring House, PA. This lifestyle nurtured his abiding empathy for animals and his passion for open space and habitat preservation. Nod was the consummate self-sufficient outdoorsman. He derived great joy from nature, raising animals, and building things on his own hobby farm, Roconante, where he lived for most of his life. Nod’s stamina and energy made him an indefatigable gentleman farmer well into his seventies.

Noddy was known as much for his affectionate and loving sensitivity to other people as he was for his intellect and tenacity. His belief in the tenet “There but for the grace of God go I” informed his lifelong dedication to the care of others, and there was no animal or person that could not find refuge at his farm. He helped and mentored countless people, extending lodging, financial support, and counsel, especially to young people in need of direction and guidance. A true nonconformist, Nod was spirited, irreverent, and inclusive. He perceived and enjoyed the comical and absurd; his ready wit and unmatched sense of humor were vital aspects of his positive attitude and charisma.  Nod always created fun, and his humor lifted people through life’s adversities, including his own.  He was known to travel in the company of a variety of species, dogs in particular, whom he always considered his capable “business associates”; he believed animals to be among the most excellent companions, animating life’s journey.

Nod’s devotion to fathering his four children was another great joy of his lifetime, and he was proud of his commitment to helping them discover their passions and pursue their dreams. “To thine own self be true” served as a prominent guiding philosophy in his fathering.  Affectionately called “Nud” by his children, he passed along his work ethic, sense of adventure, and his interest in aviation, which he learned from his own mother, herself a pilot. He explored his many interests and adventures with his children, taking them all over the world flying, skydiving, camping, fly fishing, sailing, and motorcycling.

True soulmates, Nod and his adored and devoted wife, Ginny, were inseparable during the last several decades of his life. Together they enjoyed travel, outdoor adventures, and the simplicity of life’s pleasures on their farm, where they were married in 2005.

Nod belonged to several old Philadelphia organizations and especially loved the State in Schuylkill, where he enjoyed four decades of camaraderie and friendship. Serving his final five years there as governor, Nod distinguished himself though his stewardship, revitalization of historical artifacts, and his irrepressible joie de vivre. A memorial service will be held Saturday, September 4, 2021, at 2:00pm, at St. Thomas’ Church Whitemarsh in Fort Washington, PA. In lieu of flowers, those who wish to make a contribution may give to the Wildlife Conservation Network (www.wildnet.org) or to the First Troop Philadelphia City Cavalry, Military Heritage and Educational Foundation, Inc. ( http://firsttroop.com/).