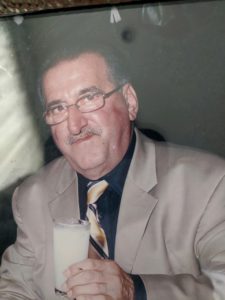 “…Since we believe that Jesus died and rose again, even so, through Jesus,
God will bring with Him those who have fallen asleep”. (I Thess. 4:13)

Mihran Vartanian was born to Barkev and Lucine Vartanian on October 15, 1949 in Aleppo, Syria. He had 4 Sisters Arshalouys Grboyan, Maro Kasbarian, Takouhi Karamanoukian and Elizabeth Asadourian and 2 brothers Manoog and Vrej. Mihran was predeceased by his two sisters, Arshalouys and Maro, may God bless their souls.

He Migrated to the United States in 1971.

At the age of 25, he got married to Maral Kashikjian on August 7, 1974 and was blessed with three children- Anto, Viken, and Lucy, who in turn had their families: Anto & Nanor (Harutunian) Vartanian, Viken & Sareen (Bedrossian) Vartanian, David & Lucy (Vartanian) Azizyan, and gave him 5 grandchildren: Aren, Anna, Layla, Aline,  and Rose. The loves of his life..

Mihran was a family man who loved his church and Armenian community. A hard working man, who was not worried by any amount of responsibility that came his way. He was a very proud father, grandfather, and a wonderful husband. He loved his Armenian community, always offering a helping hand, and doing as much as he could to help. He will always be remembered for his famous Shish Kebob, which brought him tremendous joy knowing that the people enjoyed it.

In the history of St. Gregory the Illuminator’s Armenian Apostolic Church in Philadelphia, he was the only male to be inducted in the Ladies’ Guild. He was the best, a legend, and the church  was such a big part of his life. He was member of  the Men’s Club and he worked diligently for the Bazaar – setting up booths and cooking the kebob.

He was a devoted father to Anto, Vicken and Lucy, always guiding them, without overpowering, letting his children make their own decisions and being a friend when they needed. He was devoted companion, a man of principals, and a faithful friend of his ideology.

He was a very religious man, something that he showed in the deep love he had for his family. He kept the family together and always gave loving and sound advice. He was a sociable, very gentle, sweet soul, and kind person. He was a loving and sacrificing husband and father.

During the past year, as most people are aware, Mihran was hospitalized numerous times. His wife and kids were by his side through his entire journey, especially during the hardest times these past few weeks. His wife, Maral did not leave his side for a second, being with him when he was at the hospital and taking care of him when he was back at home.

Unfortunately, after a short and difficult battle with this disease, Mihran’s body succumbed to this terrible illness and passed on after being hospitalized for one week.  On Wednesday, March 24, 2020, Mihran passed away.

St. Paul, in his 2nd Epistle to Timothy, speaks about his life coming to an end and refers to it as being “poured out like a drink offering”. Over the past several months, Mihran’s family has watched and prayed as his life was poured out, and he moved even closer to the brink of death. It has not been easy for either him or his family. Again like St. Paul, Mihran “fought the good fight to the end.” He ran “the race to the finish.” He “kept the faith.”

If we believe in life eternal, then we believe that Mihran has returned into the arms of Our Lord in The Heavenly Kingdom. He will be missed by his family, many loving nieces, nephews, cousins, and friends. May He Rest In Peace. In lieu of flowers contributions in Mihran’s name may be made to Marall Vartanian, 1605 Mulberry Rd., Flourtown, PA 19031. His family will distribute the funds the three charities that were special to Mihran and his family.

May his memory shine forth always