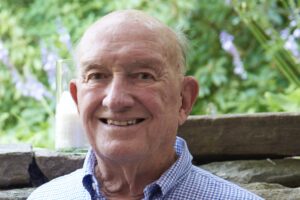 He graduated from Springfield (Montco) HS class of 1947, and earned a four-year scholarship to Columbia University, from which he graduated in 1951, and then served in the US Navy on the destroyer Forrest Royal as a communications officer. During his tour, they sailed above the arctic circle among other places. Married Doris Turschmann in 1956. He earned a degree in Mechanical Engineering from Drexel in 1959. Upon leaving the Navy, he went to work for Yarnall Waring in Blue Bell, and later moved to IBM, from which he retired in 1991 after a long career there, mostly as Systems Engineer. Merritt was also active in the Boy Scouts, going on numerous camping and canoeing trips, and served as Scoutmaster for Troop 116 in the late 1970s. Merrit was a long standing member of the Ft Washington Historical Society.

After his first wife Doris died in 1978, he married Lois Barclay in 1983. After retiring, he had more time to enjoy sailing the Chesapeake Bay on his boat, Second Wind, with Lois. He had a deep appreciation for the Wissahickon valley and did volunteer work there for the Friends of the Wissahickon, including his most recent duty as leader of the structures crew, repairing benches, fences, and other structures in the park. Merritt always looked forward to family gatherings for holidays and parties. He also served 30 years on the board of directors of the Stratton Management Company and was a member of St Pauls Reformed Episcopal Church in Oreland.

Relatives and friends are invited to Merritt’s Memorial Service Wednesday July 20, 5pm at St Paul’s Reformed Episcopal, 800 Church Rd, Oreland, PA 19075. Memories and condolences can be shared at craftfuneralhomes.com. Interment will be private. In lieu of flowers contributions in Merritt’s name may be made to The Friends of the Wissahickon, 40 W. Evergreen Ave. #108, Philadelphia, PA 19118.