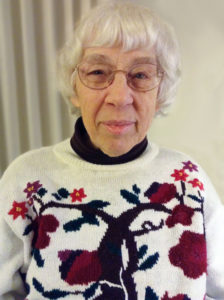 Ball, May Belle (nee Huber) 88, passed on April 22, 2020, at Foulkeways at Gwynedd after a long battle with cancer. May was born October 24, 1931, in Philadelphia, PA to the late Harry Steele Huber Jr. and Mary (Moore) Huber and raised in Lansdowne. Beloved wife of over 63 years to Ethan F. Ball Jr., whom she met through Trinity Club. They were married August 18, 1956, at St. John’s the Evangelist Church in Lansdowne then moved to Flourtown where they raised their children Ethan Frank Ball III, Stephen (J.J.) Ball, and Mary (Stephen) Wietecha. She will be missed by her three granddaughters, Kyleigh Ball, Maureen Wietecha and her partner William Erickson, and Shannon Wietecha and her fiancé Brian Kniezewski along with one great-granddaughter, Sadie May Belle Kniezewski. May leaves behind two sisters, Ruth (William) Ziegler and Miriam (the late David) Stanton and many nieces and nephews. She was predeceased by her brothers, James and George (Jo) Huber.

May Belle graduated from the Woman’s Medical College of Philadelphia Hospital School of Nursing and worked proudly as an RN at the hospital in both the operating room and teaching student nurses. She earned her Bachelor of Science in Nursing from the University of Pennsylvania. After her children were born, May Belle retired from nursing and was involved in many volunteer activities including the American Cancer Society and the League of Women Voters where she edited the Montgomery County Voters Guide was on the State Board and worked in their state office.

She was an active member of St. Thomas Episcopal Church, Whitemarsh for over 40 years including singing in the choir, teaching Sunday School, serving on the Vestry, and volunteering in the office. She traveled to Guatemala on two mission trips. More recently she was a member of the Church of St. Martin-in-the-Fields, Chestnut Hill. She was a dedicated member of the Society of the Companions of the Holy Cross and loved to attend retreats at Adelynrood in Byfield, MA

Highly educated for her time, May Belle was a strong independent woman. She was intelligent and compassionate and gave freely of her time and resources to help others. Her actions spoke for her values as she worked tirelessly for the causes she believed in.

May Belle’s memorial service will be scheduled at a later date when friends and family are able to gather. In lieu of flowers, contributions in May Belle’s name may be made to the Society of the Companions of the Holy Cross (SCHC) at 46 Elm St. Byfield, MA 01922