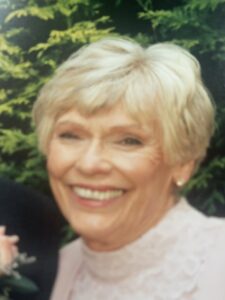 Mary was born November 22, 1926 in San Francisco to Elizabeth Maury Beveridge and George Gorham Scarlett.  She was educated at Hamlin School in San Francisco, and graduated from Ashley Hall in Charleston, South Carolina, and Barnard College, New York City.  Following her graduation, Mary worked at Charles Scribners’ Sons in New York City as Assistant to the Editor of Children’s Books.

After her marriage to Richard in 1953, the couple moved to Chestnut Hill, but soon settled in Lower Gwynedd, remaining there for nearly 50 years.  During this time, Mary was a member of, and a tireless volunteer for, St. Thomas’ Church, Whitemarsh, PA.  She served on the vestry and the altar guild, was a Stephen minister and chaired numerous committees.  She was also a member of the Huguenot Society, and enjoyed memberships at the Acorn Club, the Philadelphia Cricket Club and the Penllyn Club.

Due to current circumstances, a memorial service for Mary will be private.  In lieu of flowers, contributions in her name may be made to New Bolton Center, 382 West Street Rd., Kennett Square, PA 19348.