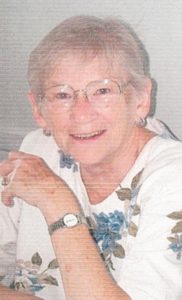 Reinwald, Mary Elizabeth, “Liz, 94, passed away peacefully at home surrounded by loved ones on November 17th, 2017.  Beloved wife of the late Norman L., daughter of Silas R. and Edith M. Reynolds.  Mother to Eileen (Timothy) Wysong and grandmother to Chelsea and Kevin.  She also be greatly missed by her niece Marbi Smith.  She was preceded in death by her sisters Margaret Reynolds and Nan Sundquist and her niece Jennie Ryszka.

Born in Lake City, Michigan, Liz grew up in Lancaster, NY.  She went on to attend Bryant and Stratton Business School in Buffalo, New York, eventually working as a secretary in the city. Married to Norm in 1959, they moved to Flourtown in 1962 and adopted their daughter.  She was active in Girl Scouts, working herself from volunteer to District Coordinator, even taking on the role of Camp Director for several years at the annual summer camp. “CeeDy”, as she was known, was a big hit.  Liz returned to the workforce at Robertson’s Florists, acting as store manager for many years.  After “retiring” from Robertson’s in 1993 she went to work at Play n Learn for another 10 years caring for the youngest of infants.  In 2003 she enjoyed a final retirement trip to Hawaii with her daughter, son in law and grandchildren.  In her later years she could be found cheering her grandchildren on at their varied sports events or having lunch with good friends.

Her grandchildren will remember and cherish day trips with Mom Mom to the bug museum, Elmwood Zoo and Ott’s Greenhouse’s.  Known for her love of the shore, her many nieces and nephews have memories of long walks on the beach collecting seashells with “Aunt Beth”. A Memorial Mass of Christian Burial will take place Saturday, November 25th at 10 A.M. at St. Genevieve’s RC Church, Flourtown.  The family will greet friends beginning at 9 A.M.  Interment private.  Memorial contributions in Liz’s name may be made to The Girl Scouts of America, P.O. Box 5046, New York, NY  10087-5046.