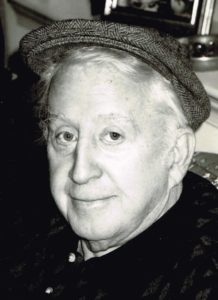 Mark E. Howlin passed away Thursday November 3rd at the age of 93. He is survived by his daughter Lisa Thomas ( Christopher Thomas) his son Mark X ( Roberta Hitschler Howlin ) , his longtime companion Amy Shao, his niece Eileen Howlin, His nephews Thomas and James. He is the beloved grandfather of Katherine Howlin , Connor Howlin, and Christopher Thomas. He was predeceased by his wife Jean (nee Reisenweaver) his parents Ellen (nee Mc Fadden) and Thomas, and his brothers Thomas and James.

Mark was born in Miami,  Arizona on December 31st, 1922. At the age of four, his family moved to Philadelphia and settled in the Germantown section of the city. By the age of 6 he was actively working in the family’s grocery store where he ran the penny candy counter, which sparked his entrepreneurial spirit that lasted the rest of his life. He graduated from Germantown High School before entering the Navy in 1942, where he served on the USS Cabot as a Seaman 1st class in the South Pacific. As part of the Navy’s V-12 program he graduated from Cornell University’s Hotel School. Shortly thereafter  he took a job at Brock’s food service company, where he met his future wife Jean, who was his boss. Following that he launched his retirement home, the Colonial Inn, which he operated for over 30 years.

Mark loved large family gatherings at his homes in Chestnut Hill and Avalon where all were welcome. He never shied away from a hotly contested bridge game or a hearty political discussion. In addition to traveling to Ireland, the home of his parents, he enjoyed traveling throughout the world.

Family and Friends are invited to celebrate Mark’s life at Craft Funeral Home in Erdenhiem on Saturday November 12th. Viewing is noon until 1 PM, followed by a prayer service at 1 PM followed by burial at Holy Sepulchre. An Irish wake will follow.

Contributions in Marks name may be made to Children International www.children.org, or Inn Dwelling, 109 E. Price St., Phila, PA 19144.