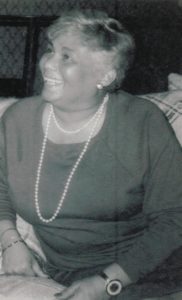 Lois Emily Carter Ramsey was born to the late John Allen Carter and the late Alice Ruth Mason Carter, on May 1st, 1928, in Winston-Salem, North Carolina.  She was educated in the Winston-Salem Public School System and graduated from Atkins High School, in 1944, where her father was the principal.

In 1952, she began her career with the Philadelphia School District in the classroom as a kindergarten teacher.  Then in November 1957, Lois married Donald Paul Ramsey.  From this union, came one child, Donald Paul Ramsey, Jr.  They had a brief, but beautiful union, which ended with Don’s passing in April 1967.

Shortly before his passing, her husband Don encouraged her to phase into administration, which she did, working as a supervisor and a field coordinator for the Get Set Child Care Centers.  She instilled excellence and the love of teaching to her staff.  Lois loved her work and, especially, she loved the children. Lois worked in the school system for forty-three years.

Lois asked the best of others and she gave her best in return. She was a mentor and friend, a counselor and confidante; from the moment she met you, you became her friend and long-time friends became her family.  Her vibrant personality drew the attention of everyone, the party began when Lois walked into the room.  Lois was warm, open and bubbly, with a magnetic personality and ageless beauty.

During Lois’ final years her friends were always there to provide care and comfort. We are most especially grateful to the staff, nurses and doctors from the Hill at Whitemarsh.  The care, comfort and friendships she found there made her last days joyful. There were so many more…thank you so much for what you did for her.

Lois was predeceased by her husband, Donald Ramsey, her brother John Carter, M.D. and her nephew, John Carter II and is survived by her son Donald P. Ramsey, Jr. of Washington DC and his partner Ronald Cocome. Nephew Craig Steven Carter, M.D. of Garner, NC , his wife Kim Carter;  a great-niece, great-nephews and numerous relatives and friends.