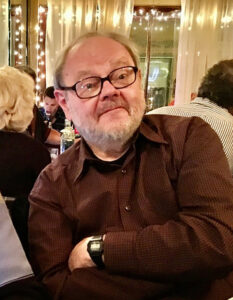 Whitney Carpenter, age 83, passed away on September 28, 2022 of complications from Parkinson’s, after a hospital stay.  Whit was also known as Whick to friends and family – a nickname given to him by his older sister, Donna, who at age two could not pronounce Whitney and, instead, called him Whicky.
Whit was born in Hudson, NY in 1938 and lived in Germantown, NY where his father was a solo-practice small town doctor.  In 1952, when Whit was a freshman in high school, the family moved to Fayetteville, NY so his dad could be in a partnership with another general practitioner.
Whit started at Kenyon College, but after one year he joined the Air National Guard.  After a short tour he decided that he and the military were not a good match, so he continued his education at Penn State.  He claimed he chose Penn State because it seemed that’s where the fun was.  He often joked that he chose English as his major by flipping a coin, or perhaps the registration line for English classes was shorter than the line for Psychology.
Whit met his wife to be, Lynn, at Penn State where he earned a B.A. in English.  They married and moved to Rochester, NY where he earned an M.A. in English at the University of Rochester.  Whit then taught English at Shippensburg University while he and Lynn raised two little girls, Leslie and Nancy, in Carlisle, PA.
Whit became disenchanted with US politics in the late 60s and early 70s because of the ever-expanding war in Vietnam.  He applied for and received a grant to be a Fulbright teacher, so he and Lynn and their young family moved to Denmark where he taught in Copenhagen and two smaller cities.  At the end of the year in Denmark, the family traveled throughout Europe for 6 months in a Volkswagen camper bus.  Then they sailed back to the US (with the VW camper) on a tanker ship.
Back in the states, Whit and Lynn decided to move to Philadelphia because they enjoyed city life.  Whit taught English at Upper Merion School District and William Penn Charter School.  Whit quit teaching for a while.  He painted houses and worked at the Weaver’s Way Co-op.
He spent the rest of his career as a professor of English at Montgomery County Community College where he taught English composition.  He spent long hours grading his students’ many writing assignments in his upstairs office – a bedroom chair.    When he was particularly moved by a well written paper, he would share it with the family.
On the last day of class each term he would hand out “Whitney” awards, fashioned after the Oscars, to recognize an accomplishment for each student in the class.  After the award ceremony he’d show the class his favorite movie, Cinema Paradiso, which never failed to make him cry.
Whit was quiet, kind and sensitive and not one to tell lengthy stories but was always quick with a quip or pun.  He really enjoyed making people laugh.   He was especially good at producing giggles in little kids, including his grandchildren, with a silly joke, a funny voice, or a little bit of slapstick. He loved reading and folk music.  He spent hours taping and compiling his favorite songs from Gene Shay’s radio show and sharing the tapes with family and friends.
Whit took his greatest pleasure in life from spending time with his family, particularly his four grandchildren.
A celebration of Whit’s life will take place in the Spring. In lieu of flowers, contributions in Whit’s name may be made to Southern Poverty Law Center, splcenter.org.