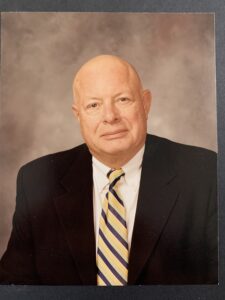 John Curtis Brewer, 87, died peacefully at home in Lafayette Hill, PA with the love of his life and wife of 62 years, Nancy Smith Brewer, by his side.

An accomplished gardener, woodworker, and lover of all nature (so long as it didn’t eat his flowers or knock over his trashcans), Curt sought out and absorbed as much knowledge as he could lay his eyes upon. Always eager to share and discuss what he had learned, Curt often threatened to show up at his children and/or grandchildren’s schools to deliver an impromptu lecture.

Regardless of what life threw at him, his smiles and laughter were never far away, even if his jokes and commentary occasionally walked up to (or potentially over) the line of propriety. He worked hard at and for everything he did, whether researching a company to invest in, volunteering as an EMT for 30 years, or coordinating the building of a massive train set at The Hill at Whitemarsh.

Curt was ardently devoted to the communities he lived, worked and moved in. After graduating from Bowdoin College as a distinguished ROTC member, he began a lifetime of service to others by heading to Korea for 16 months as a Tank Commander on the DMZ, ultimately earning an Honorable Discharge as a Captain, Armored Division in 1964.  After the Army, he met and married Nancy and worked for Pennsalt Chemicals, though the bulk of his professional life would be spent at Burke, Lawton, Brewer & Burke, a Financial Advisory firm.

Despite having a full-time job and three children, Curt continued to contribute his time and energy to the community at large.  His long tenure at the Springfield Ambulance Association culminated in being its Chief for several years, and he simultaneously donated his time to the Whitemarsh Township Zoning Board and the Police Pension Board. He also volunteered for and ultimately headed up the Montgomery County Prison Board and was an active member of the Military Order of Foreign Wars where he served as Secretary-General and as Treasurer of the PA Commandery Scholarship and Preservation Foundation.

Curt was, first and foremost, a loving husband, father, brother, uncle, and grandfather. He is survived by his wife Nancy, daughter Laura and son Chip and wife Elizabeth. He also leaves behind his beloved grandchildren Annabel, Meg, Tim, and Libby. He is predeceased by his son John Curtis Brewer, Jr. All will remember his joy for life, expansive optimism, and incredibly deep reservoir of caring, strength and love.

A Memorial Service for Curt will be held at St. Paul’s Episcopal Church in Chestnut Hill, PA on Monday, September 12th at 11:00am.

In lieu of flowers, gifts may be made in Curt’s memory to either The Hill at Whitemarsh, 4000 Fox Hound Drive, Lafayette Hill, PA 19444 or the St. Paul’s Episcopal Church Memorial Fund, 22 E. Chestnut Hill Avenue, Philadelphia, PA 19118.