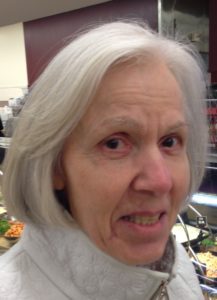 Hanny was born and raised in Mariet, a rural village in the Tyrolean Alps in northern Italy.  As the sixth of eleven children, she learned about hard work at an early age.  She loved going to school and developed a strong Catholic faith; however, at the age of fourteen she was sent away from home to work for a farmer to tend to his young children and household.  At eighteen, she followed in her sister’s footsteps and moved to Rome, Italy.  While considering a career as a nun or nurse, she met her future husband, Hermann. They married in Rome in 1953.  Shortly afterward, Hanny immigrated to the United States, first settling in Philadelphia’s Germantown section and later, in Wyndmoor, where she was a parishioner of Seven Dolors Church.  During her early years in America, she taught herself English by listening to the radio and watching TV.  Hanny worked at the Peter Pan Bakery in West Oak Lane, as a model for a Philadelphia department store, and as a nanny.  Desiring children of her own, she prayed to the Blessed Virgin Mary and was blessed with a daughter and a son.   Hanny recognized the importance of education and worked fervently to fundraise on behalf Seven Dolors School.  During her children’s school years, she cared for numerous elderly people, some of whom suffered from Alzheimer’s or dementia.  Suddenly widowed at 56, Hanny turned to her church, spending endless hours cleaning and starching altar linens and creating festive floral displays until Seven Dolors was permanently closed and merged into St. Genevieve’s parish in Flourtown.  She enjoyed artistic pursuits, and after receiving instruction in oils from Brother Fred Stelmach at LaSalle College High School, she painted many scenes of her homeland.   Hanny always offered a gentle smile, a warm hand, and a heartfelt kiss to those she loved. Her wish to remain in her home, despite her battle with dementia, was fulfilled through the dedicated love and care she received from her family, friends and caregivers.