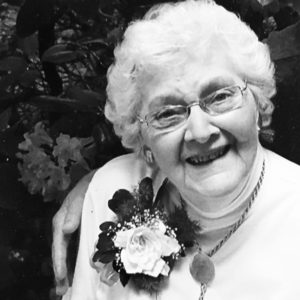 Jean B. Smith (Boughner), 97, of Bethlehem, Pa., formerly of Chestnut Hill, Pa., died peacefully at Country Meadows of Bethlehem, April 2nd, 2019. She was the wife of the late Robert N. Smith who died in 1993. Jean was born in Wilkes Barre, Pa. the daughter of the late S. Oscar and Nellie Boughner, and graduated from the Stevens School in Philadelphia in 1939.

While living in Chestnut Hill, Jean volunteered for numerous organizations: the Northwest Community Ambulance Corp, Gray Lady for the American Red Cross at Chestnut Hill Hospital, the Main Street Fair and was chair of the Chestnut Hill Academy Centennial Committee. After moving to Bethlehem, her volunteering continued at St. Luke’s Hospice and Blough Health Care Center.

Jean was the head receptionist at Chestnut Hill Hospital for 21 years, retiring in 1995. During her years at the hospital, Jean with her warm smile and welcoming personality, played different roles depending upon the situation of the many people who walked through the doors: problem solver, babysitter and counselor.

In addition to her husband, Jean was predeceased by her son, Griffin B. Smith and her sister, Claire B. Pierce. She is survived by her son, R. Peter Smith II (Carol) of Estes Park, CO., and daughter, Nina S. Metzler (Jeffrey) of Bethlehem, Pa., 4 grandchildren, Pete Maysmith (Nancy) of Denver, CO., Chelsea J. Smith (Greg) of Oakland, CA., Derek J. Martin of  Los Angeles, CA., Ross B. Martin of Telluride, CO., 5 great granddaughters, her sister Marian B. Fuller (Robert) of Bethlehem, Pa., and her nieces and nephews.

A celebration of Jean’s life will be held at the First Presbyterian Church of Chestnut Hill (Chapel), 8855 Germantown Ave. Philadelphia 19118 on June 2nd at 2 pm.

In lieu of flowers, donations may be made in Jean’s name to Bayada Hospice, 100 Schaeffer Street, Suite 4, Boyertown, Pa. 19512 or to the Guiding Eyes for the Blind, 611 Granite Springs Road, Yorktown Heights, NY 10598

Condolences may be shared @ www.Craftfuneralhome.com.