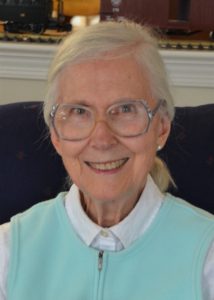 Schoeniger, Jane Williamson. (Formerly known as Jane Williamson Cross) (October 30, 2017).  Beloved wife of the late Robert K. Schoeniger.  Loving mother to Robert S. Cross (Anne), Jonathan W. Cross (Christine), Elizabeth “Heidi” C. Fellows (Ken), and Mary “Wendy” E. Prieto (Santiago).
Born in 1935 to Robert and Evelyn Williamson, Jane grew up on E. Highland Ave. and was active at St. Paul’s and the Presbyterian Church of Chestnut Hill.  She attended Jenks, Shady Hill, and Stevens, where she graduated in 1952. That fall, Jane entered Penn and was elected president of her freshman class.  In 1955, Jane won a scholarship to study at Univ. of Oslo, Norway over the summer; on July 4, Jane gave a speech in front of 2,000 in Oslo’s Frogner Park about America.  After receiving her BS in Elementary Ed. in 1956, Jane taught 6th grade at Erdenheim Elem.  In 1957 she married Whitman (Peter) Cross of Chestnut Hill, where they raised four children.  Jane thoroughly enjoyed entertaining, and as a long-time member of the Wissahickon. Skating Club, she enjoyed ice dancing.  She also studied ballroom dancing and won several competitions.  Jane and her family especially loved Ocean City, NJ, Boulder, CO; and Sun Valley, ID.  In 1980, Jane married Robert Schoeniger and lived in Erdenheim.  A lifetime learner, Jane later obtained BA’s in Music and Art History from Chestnut Hill College, an MS in Music Education from University of Illinois (over 4 summers), and she attended a classical music seminar in Eisenstadt, Austria, and studied at Oxford Univ.  Jane loved the Chestnut Hill community and in 1961, started a local literature group and joined the Junior League.  She later served as a pink lady at CH Hospital and an ambulance driver for the Northwest Phila. Ambulance Service.  Jane was an accomplished piano teacher, teaching hundreds of students in the Philadelphia area for over three decades.  Her friendliness and enthusiasm for life were contagious, and she loved and accepted everyone, just as they were.  Jane was a true encourager.  She deeply loved God, the Bible, her family, her home, and her piano.

She will also be missed by her two nieces (Sandy Williamson and Elizabeth Jane Williamson Turner), seven grandchildren, three stepsons, their families, and her brother-in-law (Dick Schoeniger) and family.  Relatives and friends are invited to Jane’s memorial service on Saturday, Nov. 11, at 10:00 AM at St. Paul’s Episcopal Church in Chestnut Hill.  Friends may call at 9:00 AM.  Interment at West Laurel Hill Cemetery in Bala Cynwyd.  In lieu of flowers, contributions in Jane’s name may be made to Gilchrist Hospice of Towson, 555 Towsontown Blvd. W, Towson, MD 21204.