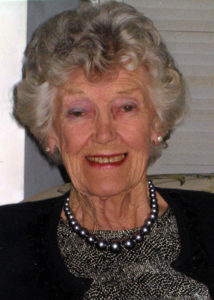 Repp, Iris Haggarty (December 6, 2017) of Flourtown, PA, Formerly of Upper Montclair, NJ. Born April 14, 1920 in Cardiff, South Wales GB. Passed away peacefully of natural causes at the enviable age of 97, surrounded by all of her loving children. A World War II British war bride and beloved wife of the late William F. Repp. Loving mother to Cheryl R. (Hugh) Sargent, Penny R. (Richard) Burrell, and David W. (Tracy). She left an indelible imprint on the lives of her 8 grandchildren, and 12 great grandchildren, and will be incredibly missed by them. As a child, she was afflicted by polio yet persevered. After meeting her beloved husband at a dance in Cardiff they married while William was still stationed overseas. Iris sailed off to the USA on the Queen Mary in 1944 to start her new life, later to be joined by her husband upon his discharge. Once learning to drive, she volunteered her time driving patients for the American Red Cross. A devoted mother, Iris always considered her greatest accomplishment was raising her three children. While still working daily at home as an accomplished homemaker she simultaneously embarked on a second career in retail sales at The Olympic Shop, Georg Jensen & Brooks Brothers where she was a star salesperson. Some of Iris’ favorite pastimes included vacationing in Westhampton Beach, attending the opera, symphony and numerous Broadway shows. Iris also enjoyed the hobbies of sculpture, painting and calligraphy, while also being the consummate hostess and chef at gatherings of both family & friends. Always a lady with impeccable manners & style, she took great pride in passing these important virtues on to her children, grandchildren and great grandchildren. Her continued pride in being a native of Wales led her to join a local chapter of the order of Daughters of the British Empire and the Welsh Society of Philadelphia. Even though this was late in her life she still enjoyed going to many luncheons and gatherings with her newfound Welsh friends, giving her incredible joy. We encourage you to please share any thoughts and stories you have about Iris in the comments section below. Relatives and friends are invited to Iris’ Memorial Service on Saturday, February 10, 2018 at 10:00AM, First Presbyterian Church in Springfield 1710 Bethlehem Pike, Flourtown, PA. In lieu of flowers, contributions in Iris’ name may be made to The Welsh Society of Philadelphia Scholarship Fund, P O Box 7287, St. Davids, PA 19087