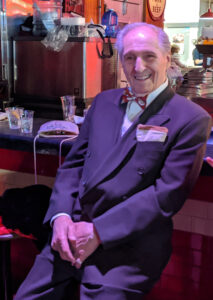 Hugo DiJohn passed away suddenly on Easter day.   With such a strong and loving commitment to God, he was blessed to be taken on such a holy day.    It is now time to celebrate his life and embrace the gifts he left for all of his family and friends.

His parents immigrated from Italy and raised him in a culturally rich, Italian speaking household in Philadelphia.  Only when he was enrolled in grade school did he learn to speak English.   He attended Murrell Dobbins Vocational School and graduated in 1946 with a license in Applied Electricity, Light, Heat and Power.

What many do not know about his youth is that he declined a full scholarship to attend Drexel University in order to help his family during difficult financial times of that era.   That gesture of selflessness is how Hugo continued to live his life rooted in his strong Christian faith.  This was the core of his never-ending kindnesses and generous gestures.

He began his career with the City of Philadelphia, and ultimately rose to a senior management position within the Streets Department until his retirement after 35 years.     With a full time job during the day, he took on extra side jobs to give his children opportunities he was unable to have in his youth.   And in between that time, he was always lending a hand to other family members and friends, asking nothing in return.     His expertise in electricity was just one layer of his skills and intellect.   Bathrooms, kitchens, any installation or construction projects, including automotive, he was front and center hands on.

Later in life, when he was unable to work under a sink or haul in a hot water heater, he was always available to share his extensive knowledge of ‘how things worked’.   He was the family/friend Consultant of ALL THINGS!

He never complained when he had health challenges later in life.   He called it the Circle of Life and said ‘you have to do the best you can with what you got.’

The life and times of Hugo was full of fun and laughter and so many hugs!   Together with his wife Rose they both enjoyed hosting at the house.   A celebration was always happening in the DiJohn household.   Always an open door for birthdays, graduations, holiday dinners or just friends stopping by.  They had a full loving life and after her passing he had many more fun adventures in life.

Whoever knew or just met Hugo would find time shared with him memorable!    No one was an acquaintance.   You were A FRIEND upon meeting him for the first time which usually followed with an affectionate new nickname.   Being a friend of Hugo’s is having a friend for life.

He loved dining out, taking walks, going for a drive, discovering new BYOBs, visiting with friends and his family, movies, playing chess, completing the daily crossword, watching Jeopardy and critiquing the monetary game strategies😊   He was always politically and locally well informed to discuss world events.   The latest phone technology was one of his favorite toys!    He enjoyed calling his friends and family, texting, leaving voicemail and texts with web-links…most notably, he used it as his encyclopedia:   *My phone told me* 😊

He enjoying dancing and singing, enjoyed wine tasting and discovering a new favorite wine.   He also enjoyed a shot of, in his words, a “GOOD” TEQUILA or a “GOOD SCOTCH”.   He enjoyed many years of “the guys’ get togethers playing cards, and the highlight in recent years was dining out for breakfast each week.

Laughter, love and smiles is what he leaves behind along with just a few of his expressions………..too numerous to list as many were in Italian 😊

My man, pots and pans!

May the good lord take a liken to ya!

My lord is my Shepard!

Leaving a voicemail:    It’s only me from under the sea, give me a b-u-z-z

During the years of his youth up until his passing, his selflessness and generosity was unfaltering.  We will celebrate his life by aspiring to lead by his example.  Lets raise a glass, embrace, laugh, dance and sing in memory of Hugo Dad and his love of life and for all of us.    Salute and Ti voglio bene!

He is survived by his loving brother Frank DiJohn (Rita) and his devoted children Lorraine Pecora and Nancy DiJohn Bright.   He was the hero and best friend of son-in-laws Jim Pecora, Paul Bright, Desmond Peel and daughter-in-law Susan Kier (Doug).     He valued and loved his grandchildren Stephen DiJohn (Amanda) Lauren DiJohn and James DiJohn Pecora.  Most recently he became a great grandpop to Luciana, daughter of Stephen and Amanda DiJohn and was joyfully anticipating the birth of their second child, who is to be named Hugo DiJohn.  He was so excited and honored his name would live on.   Hugo is survived by many cherished extended family members, nieces, nephews and friends.

Relatives and friends are invited to Hugo’s viewing Friday 4/22, 10 to 11am at Immaculate Heart of Mary Church, 819 Cathedral Rd., Philadelphia, 19128. His Mass of Christian Burial will follow at 11 a.m.   Internment is at Westminster Cemetery, 701 Belmont Ave, Bala Cynwyd, PA 19004. In lieu of flowers contributions in Hugo’s name may be made to the National Shrine of St Rita of Cascia, 1166 South Broad St, Philadelphia, PA 19146 https://www.saintritashrine.org/