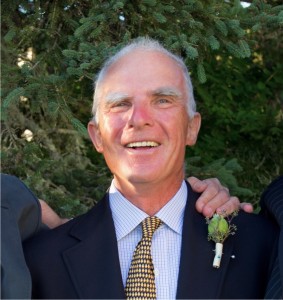 Barney, as he was known, died on August 23rd from pancreatic cancer at the age of 77.  Enthusiasm, sense of adventure, sports, games and love of family and friends defined him.  As one friend said, “Barney is always up for anything”.  He accepted his unexpected health situation with great grace. He was born in Evanston, IL, the son of Hugh McB. Johnston, Jr. and Deborah Butler Johnston.  After his parent’s divorce he moved with his mother, now remarried to C. Wanton Balis, Jr., to Greenville, DE and later to the rural Gladwyne, PA. It was an ideal setting for a very active little boy who loved the outdoors. Barney attended Haverford School, then Fay and St. Marks Schools (1956) in Southborough, MA, and graduated from Hamilton College in 1960.  Along with football, baseball, and tennis, he added ice hockey to his sports repertoire.  Other exploits in his earlier years were working on a Louisiana oil rig, wrangling and camping out West, running with the bulls in Pamplona, parachuting in the Army Reserve, and climbing Mt. Rainier and the Matterhorn, all with lifelong friends. In 1974 Barney married Louise R. Detweiler and immediately acquired 2 daughters, Louise Detweiler (Robin) and Anne Detweiler (Bibby), ages 11 and 8 becoming, his friends teased, the instant family man.  A few years after their father died, he adopted the girls.  The family joke was his declaration, prior to marriage, that raising children was just like training dogs. A few years prior to marriage Barney had had a ride in a sailplane (glider). He found another passion.  After getting his pilot’s license, he bought and raced 2 competition sailplanes, an LS3 and later an LS6, in regional and national contests, his wife as ground crew.  He told her that an important marital qualification was upper strength because the planes had to be assembled before flight.  By 1990 he decided to pursue a less risky sport, golf. In the early 1980”s his sister, Dede, developed kidney failure as a result of Type 1 diabetes.  She needed a new kidney if she was to avoid being tied to dialysis for most of her waking hours.  Of course Barney offered, was a perfect match as a kidney donor, and she live a full life for a few more years. Vacations were full of fun and sports.  The family skied Jackson Hole, sailed and hiked in Maine.  A trip to New Zealand was not complete without fishing and a bungee jump with a close friend.  He loved dogs; gardening until it interfered with golf, became obsessed with bird feeding and watching, and with  dogs; his and anyone else’s.  They adored him too.  He practiced hard at all his interests. From his first job at First Pennsylvania Bank, he went to Western Savings as an officer; then to Goldman Sacks’ Fixed Income Department.  The last move was to Provident Bank, which merged with PNC.  Shortly after the merger, he left to do what he really wanted, which was to be a private invester.  He loved the challanges of the stock market, mostly. Always generous with his time and affections, he cared for his extended family as well as his own.  Being a grandparent was a special thrill, and he loved games and kidding around with the grandchildren as they grew older.  Henry and Nelson Crane, Mac and Avery Allen, and recently, Sam and Emma Loring gave him great joy.  He and Weezie, his wife, had some good tips and lots of fun with them and their parents. Equally important were his friends.  He was devoted to them, and never tired of telling of past good times with them.  He continued his athletic activities until his health failed. In addition to his wife, daughters and grandchildren, he is survived by sisters, Betsy Goodyear and Peggy Patton, brother, Tony Balis, as well as his step sisters Eliza Chrystie and Ann Morse, step brother Tom Sheffield, and nieces and nephews. A memorial service will be held at St. Thomas’ Whitemarsh Church in Ft. Washington, PA on Friday September 18th at 11 AM.  A reception will follow. In lieu of flowers memorial contributions may be made to: The Mural Arts Program, 1729 Mt. Vernon St. Phila., PA 19130 Or Friends of The Wissahickon, 8708 Germantown Ave., Phila., PA  19118