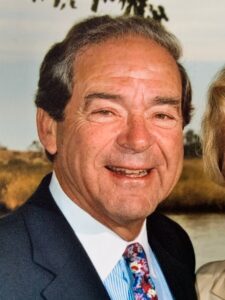 Herb was born in 1936 in Philadelphia, and subsequently attended LaSalle College High School, the University of Notre Dame and the University of Pennsylvania Law School.  He spent most of his professional career working as a trusts andestates attorney at the Philadelphia law firm of Saul, Ewing, Remick & Saul (now Saul Ewing Arnstein & Lehr LLP), where he served on the Executive Committee and eventually retired as senior partner.  Among other professional accomplishments, Herb played a leadership role in counseling and supporting many non-profit educational, artistic and healthcare organizations including Carson Valley School (which he helped to desegregate in 1967), the Pennsylvania Academy of the Fine Arts (PAFA) and the Penn Health Systems Institute for Diabetes.  As Vice Chairman of the Board at PAFA, Herb was credited for his work as a lead negotiator for the team that successfully kept in Philadelphia Thomas Eakins’ iconic painting The Gross Clinic, now shared by PAFA and the Philadelphia Museum of Art.  Herb and his wife Leah also supported the Morris Arboretum, the Pennsylvania Horticultural Society, the Philadelphia Orchestra and the Philadelphia Academy of Vocal Arts.  He was an accomplished woodworker who forged a friendship with the renowned artist George Nakashima and drew inspiration from his craft.  His varied experiences included serving as President of the Notre Dame Marching Band, a U.S.Army Reserve officer, cantor and choir director at St. Genevieve Church in Flourtown, and an active member of St. Thomas’ Episcopal Church in Fort Washington.  He took great pleasure in gatherings with family and friends, travels around the world, scuba diving and cooking (primarily Italian cuisine).

Herb is survived by his wife Leah (married 61 years), his son Herb and wife Jeanine, his son Anthony and wife Lisa, his two grandchildren Daniel and Michelle, and many nephews and nieces.  He is predeceased by his sister Mary Joan (Dunphy) and daughter Rosemarie.

An online memorial service will be hosted by St. Thomas’ Church in the coming weeks.  In lieu of flowers, memorials may be made to any local non-profit artistic or cultural institution dedicated to supporting the arts and making them accessible to the public, or to altruistic charitable organizations like Habitat for Humanity-Philadelphia or the Carson Valley School.