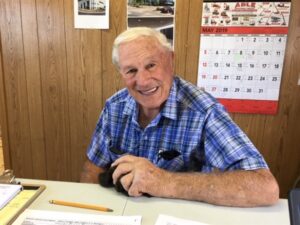 EXODUS 15:13   “In your unfailing love you will lead the people you have redeemed.  In your strength you will guide them to your holy dwelling.”

Harry was born in West Philadelphia in July 1929 to Harry and Catherine (nee Mc Cormick).  He attended St. Francis De Sales Catholic School, and later, St. Francis of Assisi Catholic School in Germantown. Harry graduated from North Catholic High School for Boys in 1947. He was a veteran of the US Army and a proud member of Plumbers Union Local 690 and the Plumbing-Heating-Cooling Contractors Association.

In the early years he worked with his father and his Uncle Luke, owners of Lavin Brothers Plumbing. He was the owner of Nagel-Lavin, Inc. He loved his work, enjoyed music, old movies, sports and, most of all, he loved spending time with his family. Harry was a protective force and influence.  He will be remembered for his work ethic, sense of humor, loyalty and generosity.

Harry was a devoted husband who cherished his wife with a deep and abiding love calling her the love of his life.  He protected her, cared for her, and loved her unconditionally.  He was devoted to his beloved until his last day on this earth.

Our Dad and Pop was a loving Patriarch in every sense of the word.  He took care of all of us, all of the time.  He was a selfless and Christ-like man who gave so much of himself. There were so many shared experiences and adventures together. He was so much fun to be with!! His nurturing influence and unchanging love were a special gift from God and will remain within us for always.

He was a respected, admired and enterprising man in his industry for the way he conducted himself as the owner of Nagel-Lavin, Inc.  A tough guy from a bygone era that overcame hardships and struggles and had no regrets.  He was a fair, reasonable, and most generous man with a practical eye.  He was a protective force and influence.  Harry Lavin was truly a man of character and he will be greatly missed.

Harry was a frequent visitor and donator to his childhood grammar school, St. Francis deSales.  He loved to make visits to St. Francis’ sanctuary to meet with Jesus.  He was thrilled when he took the family to St. Francis one Good Friday just a few short years ago.  The St. Francis Elementary School was near and dear to his heart and he became friends with the sisters of St. Francis.

It is most unfortunate that due to current circumstances Harry’s church service will be private. Per CDC guidelines face covers must be worn, and social distancing must be observed.

The family would like to invite relatives and friends to Harry’s interment on Monday, December 7th,

1 PM at Whitemarsh Memorial Park, 1169 Limekiln Pike, Ambler, PA 19002. Harry’s family is looking forward to honoring Harry with a Celebration of his life hopefully in spring or summer of 2021 – when circumstances allow.

In lieu of flowers contributions in Harry’s name may be made to any of the following: