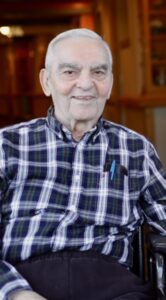 George M. Mirsch, of Wyndmoor, PA, age 94, on December 18, 2022.  Beloved husband of Anne (Duffy); devoted father of Marianne Sypniewski (David), Maureen Leonard (Edward), and Kevin Mirsch (Eileen); and loving grandfather (Pop-Pop) to Audra, Madeline, Casey, Eddie, Jack, Caroline, and Michael.  He was the son of John and Marie (Gerbe) Mirsch, younger brother of John, Jr. and Peter, and brother-in-law of Rev. John J. Duffy.  He is survived by several nieces and nephews.  George proudly served his country during the Korean War and upon his return graduated from the West Chester State Teachers College.  He began teaching physical education at Penn Treaty Junior High School where he met Anne, his future wife.  They married on December 26, 1955 and began to raise their family.  During this time, George attended night school at Temple University and received his Master of Education.  His 40 year tenure at Penn Treaty took him to the position of Principal.  He spent summers between school terms as a youth sports coach and camp counselor.  Upon retirement, he picked up his tennis racquet and hit the courts regularly.  An avid Phillies and Eagles fan, George also loved reading, playing cards, visiting the Jersey shore and babysitting his grandchildren.  He was an active member of Our Mother of Consolation parish in Chestnut Hill where he served as Eucharistic Minister, visiting hospitals and nursing homes on a weekly basis. The family would like to thank the compassionate staff and residents at ACTS/Ft. Washington Estates where he spent his last years with Anne.  Relatives and friends are invited to his Viewing  on December 28th  from 9:00 to 10:00am followed by  a Mass of Christian Burial at 10:00am at Our Mother of Consolation Church.  Interment will be private.  In lieu of flowers, the family requests donations be made in memory of George to Teenagers Inc., 84 Bethlehem Pike, Philadelphia, PA 19118.