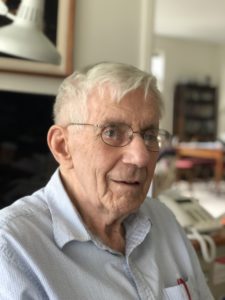 We are heartbroken to announce the death of our dear father, Frederick Remsen Rude, who was born August 6, 1932 to Margaret Abbie Remsen Rude and William Henry Curtis (Dwight) Rude and died April 23, 2020.  His early schooling was in several one room schoolhouses in the Waymart, PA area, which he reached by horse or sled ride!  He graduated from Waymart High School, from Penn State and then The University of Pennsylvania School of Veterinary Medicine.  He practiced veterinary medicine in the Kensington section of Philadelphia for more than 50 years at his veterinary clinic, Dr. Rude’s Animal Hospital.  He was beloved by his patients and their humans.  He attained the honor of Veterinarian of the Year and was featured in a radio call-in program about pet health.  He was instrumental in bridging the gap between practicing veterinarians and the academicians at Penn.  He welcomed veterinarians from the University to moonlight at his practice as well as aspiring veterinarians at all levels to gain experience in his clinic.  He invited veterinary students to his home and established a radiology continuing education group for practicing veterinarians.  He was president of the Pennsylvania Veterinary Medical Association and was an officer in the national group, The American Association of Animal Hospitals.  His practice was primarily small animals, but he treated the occasional elephant when the circus came to town!

Our parents met on a blind date when dad was in veterinary school and our mother, Ruth Anne Schnell (born 4/4/33 and died 3/26/16) was completing her teacher training at Penn State.  They were married on August 25, 1956 and were devoted to each other throughout their 59 years of marriage.  After living above the veterinary practice for several years, they settled in Glenside, PA with Ruth Anne’s parents in the family home.  They had three children, Cathy, Bob and Jim, whom they loved dearly.  They worked hard to instill in us their values:  the importance of family, hard work, caring for others and being instruments of peace, healing and God’s love.  They also taught us the importance of play and family vacations.  They took us on memorable vacations throughout the United States and Canada.  We spent time at Ocean City, NJ every summer and at dad’s family’s home, Ridge Farm in Waymart, PA.  Dad found great solace in nature, finding that his best “thinks” were in the woods.  He loved spending time at the Dietrich Hunting Camp in Thornhurst, PA, where his father also had been a member.  He loved observing wild animals and plants and enjoyed taking wildflower walks.  He and Ruth Anne were active members of Zion Lutheran Church in Whitemarsh, PA, then more recently of Christ’s Lutheran Church in Oreland, PA.  They built a wide circle of friends over their lifetimes.

Fourteen years ago, our parents left the family home and established residence at The Hill at Whitemarsh.  They loved the fact that their apartment looked out over Erdenheim Farm and they could watch the cows and geese and the changes in the trees and land with the seasons.  They soon became active members at The Hill, and Ruth Anne sang in the choir and Fred helped establish the photography club and the poker club.  Dad always loved the Philadelphia Orchestra and he and Mom thoroughly enjoyed the concerts given by professional musicians at the Hill.  Through his connections at the veterinary school, Dad brought the working dogs of Penn to do demonstrations at the Hill.   He and Mom made yet more friends at The Hill.

Fred had a wonderful sense of humor and an incredibly positive outlook on life.  In recent years, when asked how he was, he invariably would say “Fantastic!”.  He was a skilled storyteller and he had a knack for telling jokes.  He had so many humorous stories that we had them numbered.  He tried to teach us all the loon whistle, which continues as the family greeting.  He had his “medicinal” ice cream every night before bed and loved his sweets.  He had an impish, bashful smile which endeared him to those around him.

After Ruth Anne died in 2016, dad was heartbroken, but he made the decision to keep living and he embraced all that life continued to offer.  He continued to participate in family trips to grandchildren’s graduations, grandchildren’s sporting events and plays, walks along the Wissahickon and in the Whitemarsh Foundation Meadow, counting bluebirds in the Meadow, releasing Monarch butterflies from their cocoons, and spending time with family and friends.  However, his health declined and eventually his big heart gave out.

Relatives and friends are invited to Frederick’s Memorial Service Tuesday 8/24 11am, Christ’s Lutheran Church, Oreland. In lieu of flowers, donations in his memory can be made to any of the following organizations:  Working Dog Center Fund at University of Pennsylvania School of Veterinary Medicine; Christ’s Lutheran Church in Oreland, PA; Lutheran World Relief PO Box 17061 Baltimore, MD 21297-1061 or the charity of your choice.