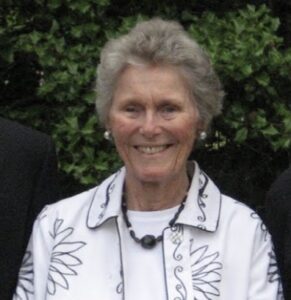 Fanny A. Cracknell, widow of John V. Cracknell died on June 15, 2022. Born in New York City on June 5, 1931, the fifth child and fourth daughter of Agnes (Hutchinson) and George W. Martin, she graduated from Barnard College and received a Master’s in Education from Antioch University. Mrs. Cracknell also received a reading certification from Massachusetts General Hospital which enabled her to teach children with specific reading disabilities.

Over a span of twenty years, she was a parent, volunteer, teacher, administrator and trustee at Dedham Country Day School in Dedham, MA. While there with a colleague and financial help from a Massachusetts State grant, she created a Holocaust curriculum appropriate for 8th graders which is still in use. In 1982, Fanny married John V. Cracknell. At that time, she was hired to be the head of the lower school of University School Milwaukee in Milwaukee, WI. After three years, she became the first woman head of the upper school. In 1987, she and her husband moved to Charlotte, NC where she was director of admissions and the financial aid officer of Charlotte Country Day. She spent the last seven years as head of the lower school and retired in 1999.

In the twenty two years that Mrs. Cracknell lived in Westwood and Dedham, MA, she raised four children and was active in the volunteer sector, including a year on the board of the Boston Center for Blind Children. Always a tennis enthusiast, she played tennis all her life and into her 80’s, reluctantly changing her game only as age became a factor.