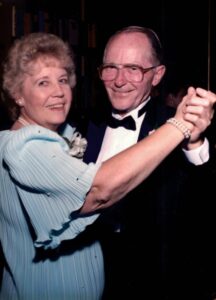 Betty was born in Philadelphia, Pa, the daughter of the late Bernard and late Marie (nee Finger) Wasmuth. Wife of the late Arthur H. Herling (married 1948) who died in 2011. Betty grew up in Kensington, her family lived above “Wasmuth’s Bakery” which was owned and run by her family. She spent a lot of her childhood working in the bakery, developing a taste for cream donuts.

She was a graduate (a year early) of Kensington high school (an all girl high school) in Philadelphia class of 1945. After high school she went on to bookkeeping school and was a bookkeeper for many years to follow.

Betty was proud of her German heritage and loved singing and speaking in German. She loved celebrating “Fasnacht Day”, an Easter tradition, celebrated in Germany by indulging in pastries (cream donuts!) before Lent. For many decades, on Labor Day Weekend she attended the “Cannstatter Volksfest” in N.E Phila with her family. Betty attended “The Cannstatter” for most of her 93 years. Along with other traditional German folk dances she especially loved dancing the “Chicken Dance” with her children and grandchildren. It has since become a tradition that will carry on for years to come. She also loved going on cruises with her husband, Art. They enjoyed going to the casinos and staying at the Showboat Atlantic City.

Due to current circumstances Elizabeth’s service will be private. Burial Whitemarsh Memorial Park. In lieu of flowers contributions in Betty’s name may be made to St. Jude Children’s Research Hospital. www.stjude.org/donate/donate-to-st-jude.html