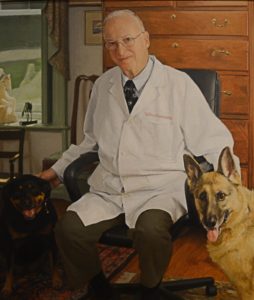 Dr. William Tasman, whom colleagues term “a true patriot of Philadelphia in general and of the Wills Eye Hospital in particular,” was born in Philadelphia, Pennsylvania, graduated from Haverford College, and received his medical degree from Temple University School of Medicine.  In 1956 after an internship at the Philadelphia General Hospital followed by one year of ophthalmology at the University of Pennsylvania Graduate School, and then military service in Germany at the 7100th USAF Hospital, he began his residency at the Wills Eye Hospital.  His only significant leave of absence from Wills was in 1961-62 when he took a retina fellowship at the Massachusetts Eye & Ear Infirmary in Boston.  Before returning in 1962 to begin the practice of ophthalmology, he also married Alice Lea Mast, his charming and devoted wife.

During Dr. Tasman’s eight year tenure on the American Board of Ophthalmology (ABO), he chaired the Written Examination Committee and was responsible for creating a computer bank for the Board’s Written Qualifying Examination

Dr. Tasman has been the major player most responsible for keeping the Wills Eye Hospital an institution where academic activities and private practice flourish and his leadership has maintained it among the best programs in the country.  The number of positions and committee chairmanships Dr. Tasman has held at the Wills since the 1970s is long and impressive and culminated in his selection of Ophthalmologist-in-Chief at Wills and Professor and Chairman of the Department of Ophthalmology at Jefferson Medical College in 1985.  In 1980 Dr. Tasman wrote The History of the Wills Eye Hospital and an expanded edition appeared in 2002.  This later work ranks as one of the most readable histories of an American eye institution. Dr. Tasman has been involved in training 139 retina fellows and 476 residents at Wills.

Dr. Tasman was an individual with a kind and gracious manner.  He had a wide range of interests which included being an astute medical historian, a voracious reader of both fiction and non-fiction, and a boater.  The cornerstone of Dr. Tasman’s respect and esteem were his exemplary level of competence as an ophthalmologist and his ethical behavior as a physician.  Ophthalmology has benefited for decades from his efforts and will continue to benefit from his legacy of leadership, example, and concern.

Dr. and Mrs. Tasman were a united team devoted to fundraising with regard to the Wills Eye Hospital and many other causes, including ORBIS, the American Academy of Ophthalmology, and the American Ophthalmological Society.  Dr. Tasman is survived by his wife of 55 years, Alice Lea Mast Tasman, his three children of whom they are justly proud: James Barclay Tasman, William Graham Tasman, and Alice Tasman Morris, and five grandchildren; William, Grace, Teddy, Clay, and Louisa.

A Memorial Service is planned for Friday, April 28th at 11:00 am at The Presbyterian Church of Chestnut Hill.  Interment private.