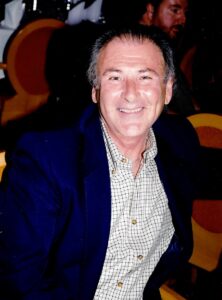 The life of David Paul Napoleon, Jr. is being celebrated as he passed after making his dream move to Bluffton, South Carolina.  David passed peacefully on January 19, 2023 and was predeceased by his beloved mother, Ruby (Smith) Napoleon, and his father, David P Napoleon, Sr.

David was born in Chicago Heights, IL on October 18, 1950.  David had many adventures with his sister Paula Napoleon (Patricia Sapnas).  They so enjoyed watching the Three Stooges and Monty Python, traveling as a family and dancing at any opportunity.  David’s youth rooted him in an atmosphere of love, family traditions, and the centrality of gathering together that endured through his life.

After the family moved to Abington in 1962, and graduating from Abington High School, David attended Penn State University and graduated from LaSalle University.

David’s love for his children was as individual as each of them.  He provided a foundation of support that enabled each of them to grow, pursue their dreams and thrive.

David and his first wife Judith (Lohr) married in 1973 and had two children- Matthew (Amy Napoleon) and Nicole (Matt Dalberto). Matthew gave David the opportunity to share his love of sports, especially soccer, and coaching him was a lasting source of pride.  David and his daughter Nicole shared a love of adventure, telling stories and speaking to each other with accents.

In 2000, David married Deborah (Weiner) and became a father to Max Glenn (Carolyn Mau).  Max provided David with adventures in wrestling, a shared love for Lord of the Rings and someone to laugh with at Debie’s lack of directional sense.

David also became a grandfather in 2000 and has five grandchildren (Gia Napoleon, Carina Napoleon, Dominic Napoleon, Joseph Dalberto and Devon Dalberto).  David enjoyed watching the girls grow up and play sports and was so proud of the young adults that they were becoming.  He traveled to Cooperstown, NY this summer to watch Dominic play baseball.  With Joseph and Devin, he loved reading to them, walking around holding them when they were little, spoiling them while he and Debie babysat and basking in the joy that is grandparenting.

David loved to travel, especially cruising.  His favorite trip was to Italy to walk in the town of his ancestors. In 2022, he completed another milestone trip: a journey to visit all 50 states by cruising to Alaska and Hawaii.  David was a great cook and enjoyed entertaining.  He loved to dance with his wife at Amarone’s and with his family anytime and anywhere.  He loved all types of music, especially Motown, the Eagles, and Little River Band.  He was a die-hard Philadelphia sports fan, attended as many games as he could over the years and started a tradition with Debie, Paula and Patricia of an annual Eagles game/weekend.  He was a Flyers season ticket holder during the 70’s and never missed a chance to cheer for the Sixers and Phillies.

After some years of hard work and time as a Veteran of the Army Reserve, David settled into a long, rewarding and productive career in non-profit accounting.  He worked in various accounting roles at the Eastern Pennsylvania Conference of the United Methodist Church, often advising Philadelphia area churches and youth-oriented foundations and retired from Eden Autism Services as the Chief Financial Officer.

A reception will be held after the service at a nearby location.  Details will be provided.

In lieu of flowers, David’s family requests that donations be made to Eden Autism Services in his memory. David was extraordinarily proud of what he and his colleagues accomplished during his time as Chief Financial Officer. Contributions will be used to help ensure that Eden’s critical services for children and adults are sustainable for as long as necessary. Please mail to The Eden Autism Services Foundation, 2 Merwick Road, Princeton NJ 08540 or made securely via this link.