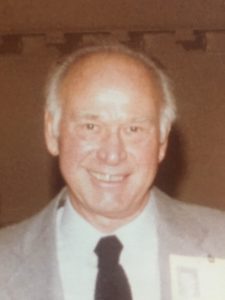 Daniel James Histon passed away on June 22, 2019, just one day before his 103rd birthday. He has left this life and is reunited with Ann, his beloved wife of 67 years. He also leaves behind his loving children, Linda, Gail and Dan, his four grandchildren, Kristen, Jamie, Rob, and Wade, with whom he celebrated many milestones, and his three great grandchildren, Graham, Grady, and Lucien, who were blessed to have a Great Granddad.

Dan was born in St. Louis Missouri on June 23, 1916. His father died when he was two years old and Dan spent most of his childhood with relatives in St. Louis while his mother worked in New York to support him.  He moved to Philadelphia where he attended Germantown High School for his junior and senior years. He attended Drexel while working part time and earned a degree in Mechanical Engineering.

Ann and Dan were married on November 1, 1941.  They were enjoying being newlyweds until World War II intervened. Dan enlisted in the Army/Air Force and was a Captain for 3 years, serving in England.

After the war, Dan worked as a sales representative for children’s clothing for 35 years. After his retirement, he and Ann traveled extensively, visiting every continent except Antarctica. He was most intrigued by China and Africa and especially loved visiting Tahiti and New Zealand.  Dan and Ann also spent the winter months in Long Boat Key, Florida and traveled to Bermuda every fall for several weeks. They had many friends in Florida, Bermuda, and in Pennsylvania.

Dan and his family lived in Erdenheim for 27 years and then downsized to Lower Gwynedd for 17 years before moving in 2000 to Meadowood Retirement Home.

Dan was an avid tennis player for most of his life, and also enjoyed table tennis, golf, bridge and poker. He also enjoyed working on his computer. Ann and Dan enjoyed watching the Phillies and were at the 1980 World Series game when the Phillies won.

Dan was the consummate gentleman who was always impeccably dressed. He was a friend and lover of all God’s creatures, large and small, especially his three German Shepherds. He was a devout Catholic for his entire life. His favorite line, after he turned 100, was, “Only the good die young, and here I am!”

Relatives and friends are invited to Daniel’s Mass of Christian Burial on Tuesday July 9 at 10am at Corpus Christi Catholic Church, 900 Sumneytown Pike, Lansdale. Friends may call at 9am. Interment Private. In lieu of flowers, contributions in Daniel’s name may be made to the Pennsylvania SPCA, 350 E. Erie Avenue, Philadelphia, PA 19134-9987 or www.pspca.org.