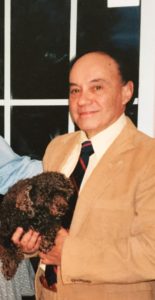 Daniel Charles Bongiovanni, Jr. died suddenly on August 18, 2019. Born on May 26, 1936, he was the youngest child of Donato and Mary (Sacco) Bongiovanni. He spent his childhood on Rowan Street in Philadelphia with his parents and siblings, Rose, James, Esther, and Mary. As the youngest child, Dan benefitted not only from the example of his parents, but also that of his older siblings, who had a big influence on his early life. Dan’s sister, Esther, had a long and distinguished career in the United States Army and Dan followed his sisters lead of military service by enlisting in the Marine Corps. upon graduating from Northeast High. While in the Marines, Dan spent time in Okinawa, Japan and Seoul, South Korea. Being a Marine was a point of pride for Dan and remained so for his entire life. Following his honorable discharge from the Marines, Dan then earned a master’s degree in Psychology from Temple University.

Through his friendship with fellow car enthusiast Newbern “Buzz” Smith, he met his love, Sandie. Buzz is Sandie’s brother. He and Dan would often fix up classic cars with Sandie checking in now and then to see what they were up to. In 1962 Dan and Sandie started their lives together when they married – a union that lasted 57 years. Dan took a position with the School District of Philadelphia. His duties ranged from coaching track and field to working as a truant officer. Dan retired from the district after 25 years. It was at this point that Dan’s professional life really blossomed. He was a partner in many varied, interesting business ventures he undertook not only with relatives, but with friends he had made throughout his life. Dan had a true passion for taking an idea and transforming it into a thriving, profitable business; a trait that was passed from his father, who helped him get his start on a path of self-employment.

While busy navigating his working life, Dan saw his and Sandie’s family expand with the addition of their son, Daniel Charles III, and their daughter Wynne Jaquet. In 1977 the Bongiovanni’s moved from their home in the Chestnut Hill section of Dan’s beloved Philadelphia and made their way to Parkside Road in Flourtown where Dan lived out the rest of his days with Sandie and their many pets. Family, friends, and interests too many to list here are what propelled Dan through his life. In later years, Dan and Sandie would spend their time with travelling, hobbies, and keeping up with their four grandchildren Daniel IV, Zoe, Anna, and Joseph. Dan lived and died the way he wanted, mostly on his terms. Terribly smart with a quick wit, an easy laugh, and a natural inquisitiveness, Dan was always thinking, looking for what was next. He leaves behind a wonderful legacy, taken up by his children and grandchildren: To question what makes the world tick and to remain rock solid in your convictions. His was a long, full life well lived. Rest easy, rest in peace, Fella.

Relatives and friends are invited to Daniel’s Graveside service Saturday 8/24, 11am at Holy Sepulchre Cemetery. In lieu of flowers, contributions in Daniel’s name may be made to the charity of your choice.