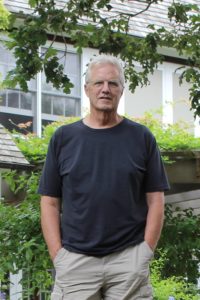 Craig MacDonald was born on June 24, 1948 in Chevy Chase, Maryland, and after a brief battle with cancer, passed away peacefully on June 18, 2020 in Eagleville, Pennsylvania.  His daughter was by his side.

Craig was the youngest son of Lois and James MacDonald.  His family relocated from Maryland to Philadelphia, Pennsylvania when he was very young, and it’s where he always considered home.  Craig had two older siblings, a brother, Alan, and a sister, Bonnie.  After graduation from high school, Craig enlisted with the Air Force, and he was stationed in various places, most memorably Greenland.  He often shared stories of his time there, the 24 hours of daylight during the summer, and the 24 hours of darkness in the winter.  It was so cold during the winter months that he needed to plug his car battery into a heater to keep it from freezing.

Upon returning home after his discharge from the Air Force, Craig worked as a barber, and enrolled in an Associate’s Degree program at a local college.  He had dinner one night at his mother’s house where he met his future wife, Karen, who at the time taught with his mother at the Pennsylvania School for the Deaf.  Some time went by before he and Karen went on their first date.  As the saying goes, the rest is history.

Craig and Karen built a beautiful life together.  They were married on October 9, 1976 and in their early married years lived in an apartment on Carpenter Lane in Mt. Airy, Pennsylvania.  They moved to a small row house on Roumfort Road, also in Mt. Airy, and in March 1978 their daughter, Lauren, was born.  Lauren was the light of their lives.

When Lauren was very young, they moved to their home on Erdenheim Road, where they spent the next thirty years.  Craig spent his time fixing the house up, his hands likely touching every surface of 115 Erdenheim Road over those thirty years, making improvements, building additions, and fixing things that were broken.  He loved that house, and the life he shared with Karen and Lauren.

Craig spent his working career at McNeil Consumer Products Company in Fort Washington, Pennsylvania.  He worked at McNeil for almost 30 years, and he made many close friends during his tenure.  Many of those friendships continued into his retirement years, work buddies turning into tennis and ski buddies.  He played on a softball team with his coworkers for many years, and really enjoyed the shared camaraderie.

When Karen, who suffered from Parkinson’s Disease, began to require more care and assistance, Craig put his life aside to take care of her.  His commitment to her was steadfast and genuine, his support unwavering.  When it became evident that she would need a change in living space, Craig found the perfect next step that would suit their needs, and that is when they moved from Erdenheim to Stony Creek Farms in Eagleville, Pennsylvania.  Craig never thought he could love a home as much as he loved 115 Erdenheim Road, but he took to 104 Jasper Court immediately and applied the same loving touch to its design and set-up.  Craig had an eye for decorating that he had kept hidden for years!

Karen’s passing in November of 2017 was a challenge for Craig.  With the help of very close friends and family he was able to wade through the sadness and grief and enjoy a life full of adventures, experiences, and memory-making.

Craig treasured his time as a Special Olympics Track and Field Coach.  He enjoyed being with the athletes very much, working with them to perfect their javelin throws and their long jumps, and was fondly known by them as Coach Craig.  Craig also worked many mornings manning the front desk at Rittenhouse Lumberyard back in Erdenheim.  Oh, how he loved being in that environment, greeting each customer with his one-of-a-kind smile.  Craig enjoyed bike riding, skiing, hiking, going to the theatre, listening to live music, and watching movies.  He was a dedicated Eagles and Phillies fan, rarely missing a game.  He loved chicken parmesan, Corona with lime, strong caipirinhas, eating burnt hot dogs cooked on the grill, and drinking his cup of coffee each morning while watching the sun rise.  He loved family vacations, outings of all sorts with his daughter and granddaughter, times at the beach with family and friends, and he even took his first trip to Europe – a tour of Portugal – at age 71!  He never met a house project at his daughter and son-in-law’s house that he didn’t like.

Craig was often quiet, a very humble man with a generous and caring demeanor.  Material things never mattered much to Craig.  What mattered to Craig was his family.  He leaves behind his daughter, Lauren, and son-in-law Edward Sotherden, and his granddaughter, Maira Sotherden.  Craig was and always will be “Mac” to Maira.  Their lives will never be the same. Craig also leaves behind his brother, Alan MacDonald and his sister-in-law, Christina MacDonald, and his sister, Bonnie Parish; his niece, Tammy Parish; his nephews, Alex MacDonald, Christian MacDonald (Holly), and Scot Parish (Jaime); his great-nephews Dante MacDonald, Damon MacDonald, and Ryan Parish; close family friend, Christina Lee; and many other extended family members, close companions, and friends.

Craig will be cremated on June 23.  A celebration of Craig’s life will be scheduled for a future date.  He always said he wanted a party, not a funeral.  His family will take some time to put together the perfect way to remember and celebrate Craig’s life.