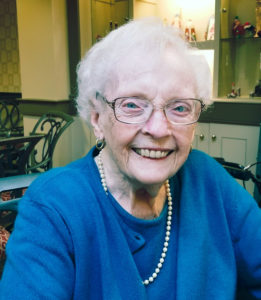 Betty Jane Turkington Jensen was born on December 7, 1927 in Chicago, Illinois to William David Turkington and Emily Garvey Turkington.  She grew up in Wilmore, KY where her father was on the faculty of Asbury College, then Asbury Seminary, and finally Dean of the Seminary.  Betty graduated from Asbury College in 1950 and moved to New York where she taught school.  She attended Drew Seminary in Madison, NJ and was married to Vern Jensen in 1955.  Together, they served in ministry in the Northern New Jersey Conference of the United Methodist Church for 25 years, living in various towns including Metuchen and Morristown. They had three daughters, Julie, Becky and Lori.

Betty later lived in Basking Ridge, NJ and was employed by the Geraldine Dodge Foundation as their Grants Manager.  She was an active member of Liberty Corner Church and served as a Board member of the Visiting Nurses Association.  In 2006, she moved to Blue Bell, PA to be near family and resided at Normandy Farms Estates.  There she was a beloved neighbor and friend and participated in various small groups, but she especially loved sharing her gift of music, playing the piano for worship services throughout the community.  She died at Normandy, surrounded by family, on February 17, 2019.

Betty’s greatest joy on earth was her family.  She was adored by her three girls, her 8 grandchildren and 7 great-grandchildren.  She was predeceased by her parents and her beloved sister, Wilmetta Abel.  She is survived by her dear brother, Charles G. Turkington; her daughter and son-in-law, Julie & Woody Hope, her daughters Rebecca Schafer and Lori Jensen; her grandchildren Melissa Snyder, Joseph Hope, David Hope, William Hope, Bradley Seymour, William Seymour, Bryan Seymour and Timothy Schafer; her great-grandchildren Julia, Emily & Sarah Snyder, Caroline Dyer and Chloe Seymour, Willow Hope and Jensen Hope.