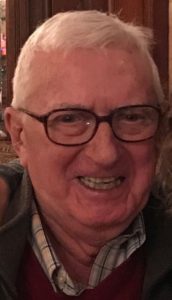 Albert “Al” Cataldo was born and raised in East Boston, Mass as the oldest of 6 children, he grew up learning the value of hard work and ever learning to build a better life for himself and his family. Beloved husband of Frances (nee Salmon). Loving father to Albert P. (Marianne) Cataldo Jr., Janet McDougall, Douglas Cataldo, and the late Suzanne Galvin, and Linda Cataldo. Step father of Elise (James) Winkler , Susan McGarvey, and  Jane McGarvey. He will also be missed by his 14 grandchildren and 7 great grandchildren. Brother of Jack Cataldo, Barbara Cataldo, and the late Lawrence Cataldo, Eugene Cataldo, and Dorothy Cataldo.  Although not tall in stature, he was tenacious in life and always looking to accomplish new goals. Growing up he loved to skate and played hockey for East Boston High School and went on to the state finals against Melrose.  Al was a defensemen who loved to hit and so tenaciously he became familiar with the penalty box.

Al joined the US Army shortly after graduating from High School and worked as a pharmacy technician where he gained his love for the industry. Upon his return from service he went directly to New England College of pharmacy and graduated in 1954.  With some financial help he purchased Byron Pharmacy in East Boston and worked from 9am to 10 pm 6 days per week and half days on Sundays.  He loved his work and his patrons who looked to him for guidance on many medical conditions.  The pharmacy also had a soda fountain where many locals often came to spend time and enjoy a Hot Fudge sundae or a Frappe.  One notable patron and close friend was Father Driscoll who would often hold confessions for patrons in the back room.

Given the long hours and lack of family time Al eventually sold the pharmacy and went to work for McNeil Laboratories, a perfect fit for Al given his knowledge of the drug industry.  McNeil was later acquired by Johnson and Johnson where Al continued a long and successful career.  He was responsible for managing the recall of the Tylenol product from all shelves when it was found someone had introduced poison to the product.  Packaging of all drugs and many products changed after that incident.

While under the J & J umbrella he spent a year in dedicated training to bring “best practices” to the J & J companies around the world.  In this role Al had a chance to visit many countries Including Europe, India and Australia training the J & J teams.  He loved teaching and sharing his knowledge of the industry.

During President Reagan’s time in office Al was selected by J & J to represent them in the joint (Government & private)  industry initiative against illegal drugs that had become so pervasive in our society.  He was extremely proud to be part of the fight against the scourge taking the lives of so many prematurely.

In Al’s personal life he loved to garden and could always be found tending the flowers and shrubs so well-manicured around his home.  He loved the ocean and spending time with family and friends at the NJ shore.

After Al retired he needed to find new challenges and began to train for marathons and was keen on speed walking daily.  His goal was to speed walk in as many notable marathons as he could including the Marine marathon several times and traveling to Ireland, Australia and other countries to participate in their annual marathons.  He loved his friends at Foulkeways and would play water volleyball as often as he could.  In his leisure time he could be found listening to a good book or playing  crossword puzzles with his wife, Frankie.

He touched the lives of many and will be sorely missed but we hope to be reunited one day together again in the presence of Lord.

Relatives and friends are invited to Albert’s Memorial Service January 26 at 2:00pm at the Foulkeways Community Center. Interment Private. In lieu of flowers contributions in Albert’s name may be made to The Friends of the Wissahickon.