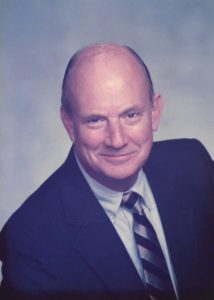 Ab Dowdell’s professional career was spent with several heating and air conditioning companies, most notably E.B. O’Reilly, where he was the service manager from 1966 until his retirement in 2006.  A graduate of Germantown High School, he attended both Penn State and Drexel Universities.  He was proud of his service as a submariner in the Naval Reserves in the 1950’s.  Ab was involved in many professional organizations, including ASRE (American Society of Refrigeration Engineers), RSES (Refrigeration Service Engineers Society), SCA (Servicing Contractors Association of Greater Delaware Valley), and MSCA (Mechanical Service Contractors of America).  He was also an active community volunteer at St. Philip-in-the-Fields Episcopal Church, serving on the vestry and as treasurer; a past president of the Upper Dublin High School Band Parents; an advisor to Oreland Troop 2 Boy Scouts; and a volunteer with The Stagecrafters theater group in Chestnut Hill.  After retirement, Ab and his wife Mim lived in Avalon, New Jersey for 5 years, where Ab was a president and trustee of the Avalon Home & Land Owners Association, a treasurer of the Avalon Museum and Historical Society, a member of the Avalon Lions Club, and a congregant at St. Mary’s Episcopal Church in Stone Harbor.

For many years, Ab was a frequent golfer at the Philadelphia Cricket Club. He enjoyed cooking, tinkering, number puzzles, and he embraced the Internet and all of its connections to the larger world. Ab remained an avid Eagles fan through years good and bad, and was particularly enjoying their current season.