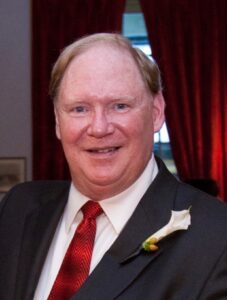 Terry Douglas Archer (the original “Arch”), a loving husband, father, brother and PopPop, and a passionate wedding and party dancer, passed away peacefully on the morning of September 30, 2020. He was 73.

Terry was born on October 9, 1946 in Cedar Rapids, Iowa, to his late parents Eugene and Phyllis Jeanette. Growing up, Terry loved to play football, basketball and baseball, and as a little league and high school player pitched several no-hitters.  He also enjoyed fishing at Lake Itasca in Minnesota with his father and uncles.

Terry went to college at the University of South Dakota, where he met his beautiful wife, Nancee. They married on May 29, 1970 in Vermillion, South Dakota. After graduating with his MBA in 1971, Terry started a 43-year career with Lockheed Martin (formerly part of General Electric). He officially worked in finance, but if you asked him, he would say with his characteristic sense of humor, “If I tell you, I’d have to kill you.”

Terry’s love of sports carried over into a passion for coaching his children’s sports teams, becoming a beloved coach for his funny and creative ways of motivating players to give their best and enjoy the game. For example, as a little league baseball coach, if you struck out looking, he would make you wear an ugly (and hilarious) hat while sitting in the dugout.  No one went down without swinging that year.

He was great at listening and giving pep talks.  If you were upset about something, he would famously say, “Well, what are you going to do about it?”  He taught us to stick with it, no matter what.  He extolled the virtues of Big 10 football.  Every chance he got, he taught people the art of the proper handshake.

Most importantly, everyone who met Terry immediately liked him. He was not the most outgoing person, but he was so likable and friendly to everyone he met. People have often said when they first met him that they felt like they knew him for years, so he made friends everywhere he went.

His family will miss him most for his incredible sense of humor.  Terry found no greater joy than in making people laugh, even at his own expense.  Archer family vacations often turned into something resembling a Griswold family vacation, with Terry playing the part of Chevy Chase. He was the life of the party and no party of ours will ever be the same.

He is survived by his wife, Nancee Archer; his daughter, Brooke Pekula (Ted), and son, Christopher Archer (Mary); his grandchildren, Sophie, Archer, Jack and Bobby; and his sister, Judy Brown.

Due to the pandemic, there will be no public viewing or services. In lieu of flowers, the family asks for donations to be made to the Michael J. Fox Foundation for Parkinson’s Research.