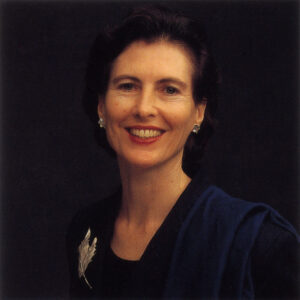 “My work is a direct experience of light and the fragility of life through the seasons. Nature is a great
teacher. Nature always reminds me of the fullness and vitality of life as well as the death and decay that
dwells within every living thing.’’ – Martha Madigan
She was the modern pioneer of camera-less photography. She was a self-proclaimed artist at a young
age and as a teenager made her first real pinhole camera which began her lifelong fascination with
photography.

Before the age of 25, Madigan had plunged into the world of ‘selfies’ which she practiced daily
beginning more than four decades before the current global trend. She spent her lifelong career as an
artist evolving camera-less photography through photograms in which she would arrange human
models or other natural materials atop photosensitive paper to capture forms silhouetted by light. This
technique is similar to the more popularly known cyanotype. For decades, Madigan was one of few, if
not the only, artist producing large-format photograms. After loyally patronizing multiple printing-out
paper sources which failed, one in France was her last resource. This printing medium no longer exists.
Her large-scale cyanotypes were also a great source of inspiration to her. In the 1980s she produced a
series of 10-foot wide cyanotypes capturing the interaction of wild foliage and ironwork on the Falls
Bridge in Philadelphia, PA. Today, one from this series is in the Philadelphia Museum of Art’s permanent collection 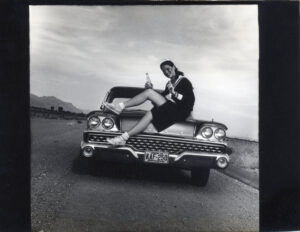 However dissimilar to our smartphone flip-lens function, Madigan used large format series Hassleblad
and Mamiya cameras to create her ‘selfies’— the first recorded in 1972. She was a midwestern girl, who
had the capacity to befriend someone from any walk of life and welcome them into her artistic calm and
spiritual nature. She spent time in artist residencies around the world and spent her adult life dedicated
to arts education.
Born in Milwaukee, Wisconsin in 1950 and raised in a devout, Catholic family, Madigan’s boundless
inspiration both integrated and transcended her traditional upbringing. She needed to share her
creative vision with the world. In 1973, at the age of 23, Madigan had her first solo show at Fort
Sheridan, IL, which launched her career as artist.

After graduating from the University of Wisconsin, Madison, Madigan began teaching art at North Shore
Country Day School. In her evening hours, she worked to prepare her portfolio for admission to the Art
Institute of Chicago. She was admitted into the Master of Fine Arts program where she graduated and
received her MFA in 1978.
Around that same time, she produced a series of photographs entitled ‘Kissing in Public’ depicting
herself and her eventual husband of more than 42 years, Jeffrey Fuller. In 1978 while teaching at Wayne

State University in Detroit, Madigan was asked to photograph Alice Neel, Louise Nevelson, Isabel Bishop
and Selma Burke in the Oval Office with President Jimmy Carter. In 1979, she moved with her husband
to Philadelphia, PA and started what became her more than 40 year career at Tyler School of Art as a
professor where she eventually chaired the Photography Department, now Professor Emerita.
She was enraptured by the beauty of nature, self-identified as a feminist, always ready with a kind word
of wisdom, iconic in form and focus, and so entirely herself. She was devoted to her spiritual practice
and spent much time at ashrams in India and New York. 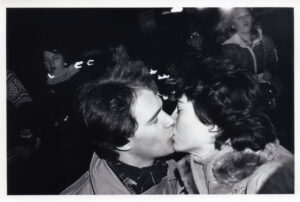 Some of her most important and lifelong bodies of work include ‘Human Nature: Solar Photograms’
which depict human growth and seasonal change in life size photograms and ‘Daily Portrait’ in which she
documented and photographed each of her three children daily from their birth until they moved away
from home. Teaching and residency invitations ensued around the world from Italy, Japan, and across
the United States—Michigan, Arizona, Rochester, New York, Colorado, Illinois, etc.
Madigan was commissioned on multiple public art projects including ‘Elements’ at the Wells Fargo
Center and Murals celebrating the Philadelphia Eagles at the Lincoln Financial Field. Madigan’s work is
included in the permanent collections of The Metropolitan Museum of Art, the Philadelphia Museum of
Art, the Art Institute of Chicago, the Milwaukee Art Museum amongst dozens of other museums, and
both public and private collections within the U.S. and Internationally.
Martha Madigan passed peacefully at home in Elkins Park, PA on Monday, August 22, 2022 after a 14
month battle with metastasized lung cancer. She is survived by her husband Jeffrey and their three
children, Daniel, Claire, and Grace and eight grandchildren, Sophia, Eve, Mason, Winston, Gloria,
Constantin, Flora and Olympia.
A memorial for friends and family will be held in September at the Philadelphia Museum of Art. In lieu
of flowers please consider a donation to Tyler School of Art and Architecture
(https://tyler.temple.edu/ways-to-give).